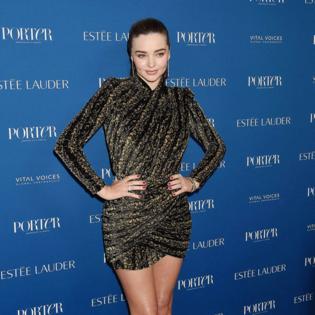 The 38-year-old model is mother to 10-year-old son Flynn, whom she has with her ex-husband Orlando Bloom, and sons Hart, three, and Myles, two, with her current spouse Evan Spiegel.

And although Evan "thinks about" expanding their family further, Miranda has said she has only ever seen herself as a mother to three sons, so isn't sure if she wants any more children.

Speaking to Marie Claire Australia, she said: "It's definitely something my husband thinks about. But personally, I've always wanted to have three boys in particular.

"I love that I have three healthy boys -- and happy boys. And I feel very blessed. But who knows what the future will hold?"

The Victoria's Secret angel has since tied the knot with Evan in 2017, and previously said she never thought she would get married again after her divorce from Orlando - who is now engaged to Katy Perry, with whom he has 14-month-old daughter Daisy - in 2013.

She said: "I didn't think after I separated from Orlando that I would find another person and have more children. I was like, 'OK. That was good. I'm good now. I'm gonna be a single mom and focus on my child and being the best mom I can be.' "

And despite their split, Miranda and Orlando are "friends now" and have a great co-parenting relationship.

Miranda explained: "It's important to put your own upset behind you, make peace for your own good and move forward. At the end of the day, we actually did that in a healthy way. We're friends now. … Whenever he would try to get into anything else, I'd be like, 'Hold up. Is this about Flynn?' We make choices based on that still to this day."