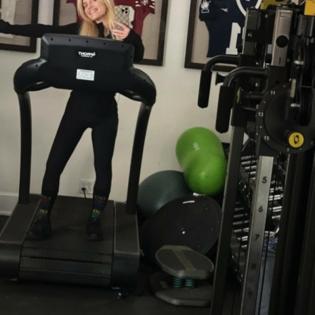 Jessica Simpson wants to stick to her fitness goals.

The singer-turned-designer has posted an update about her exercise regime on social media, sharing a photo of herself standing on a treadmill in her home gym.

She wrote in the caption on Instagram: "First day back at it and I'm already hurtin' and feelin' real dramatic about being sore. I have been craving this, but procrastinating. (sic)"

The 41-year-old star intends to stick to her workout plan - but also promised herself treats as an incentive.

Jessica said: "One work out and I am determined to not let myself down. Although I will be eating a brownie to give myself some points! #beastmode #goMOMSgo (sic)"

The 'Open Book' author has been honest about her body image battles throughout her career.

Earlier this year, Jessica revealed that she'd abandoned her scales and was instead paying more attention to how she feels.

The blonde beauty explained: "I have no idea how much I weigh, I just want to be able to feel good and zip my pants up. If I don't, I have another size. I have every size.

"I've really tried my hardest to not let that define me."

Jessica has admitted to being damaged by the negative comments that have come her way during her career.

The pop star confessed to spending "years beating myself up for an unrealistic body standard that made me feel like a failure all of the time".

She added: "I am still a work in progress when it comes to self-criticism but now I have the tools to quiet those voices in my head when they speak up."

The Duke of Cambridge - who has Princes George, eight, and Louis, three, and Princess Charlotte, six, ...Read More

Cheryl has cancelled her 'You, Me & R&B' podcast for the BBC because it "didn't feel right" to "revisit" it following the passing of her Girls Aloud bandmate Sarah Harding.

The series for Radio 2 was set to be 12-episodes...Read More

Pink helped a terminally ill fan tick off an item on her bucket list.

The 'Who Knew' hitmaker jumped on Zoom with 63-year-old superfan Diane Berberian, who has bone cancer and is being cared for at a hospice, and made her...Read More

Meghan Trainor says having two toilets in one bathroom is "the best thing ever".

The 'All About That Bass' hitmaker recently revealed she swapped out a bidet for an additional toilet - on a whim - and she has admitted it...Read More

The 'Born To Die' hitmaker was honoured with the Artist Of The Decade prize at Variety's Hitmakers awards show at City Market Social in downtown Los Angeles on Saturday (04.11...Read More

The 48-year-old star is keen to celebrate a decade of being married to production technician James O'Keefe in September 2022, but she ...Read More