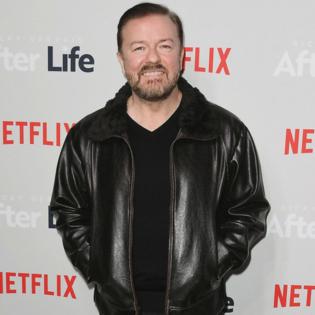 Ricky Gervais thinks the young people of today won't be "woke" enough for the next generation.

The 'Office' creator has revealed that he can't wait for the tables to turn on "woke" young people.

He explained to guest Sam Harris on his 'Absolutely Mental' podcast: "I want to live long enough to see the younger generation not be woke enough for the next generation. It's going to happen. Don't they realise that it's like, they're next? That's what's funny."

"We kicked out the old guard. We did it. There's only so woke and liberal you can get and then you start going the other way. But it's inevitable."

Ricky, 60, is a frequent critic of so-called cancel culture.

In late 2020, the comedy star appeared on a episode of the 'Smartless' podcast and discussed his fears to hosts Jason Bateman, Sean Hayes and Will Arnett.

He explained: "The scary thing is being canceled if you say the wrong thing and suddenly Netflix can take you off their platform.

"You could be the most woke, politically correct stand-up in the world at the moment, but you don't know what it's going to be like in 10 years' time. You can get canceled for things you said 10 years ago."

Ricky thinks it's important to make people accountable for their actions.

However, he dislikes when critics try to impose their ideas on other people.

He said: "The misunderstanding about cancel culture is some people think you should be able to say anything you want without consequences and that's not true because we're members of society and people are allowed to criticize you.