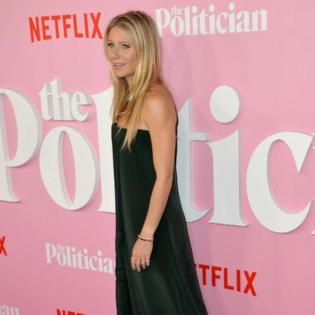 The 49-year-old star wishes she wasn't so "critical" about her appearance and could be more "loving" because she knows she'll never be in the same shape she was in her 20s.

She told People magazine: "Unfortunately, we're always looking at ourselves with a critical eye.

"I would love to get to a place where I don't do that anymore. I want to show up for myself in a more loving way, because it's all going south from here! There's nothing we can do about it."

Gwyneth - who has Apple, 17, and Moses, 15, with ex-husband Chris Martin and is married to Brad Falchuk - found the changes to her body most apparent after she welcomed her daughter into the world.

She said: "I was just coming out of my 20s when you're in that sexy, young girl phase.

"And then you're like, 'Well, how do I reconcile who I am now with that?' For me, it was really about giving myself time to be a mother, and letting my body dictate where it was going."

"We have all these expectations," says Paltrow, who wed producer Brad Falchuk in 2018. "Some women feel when they have kids that they don't feel sexual because their body isn't back yet. But it's like, 'Who said our bodies have to look a certain way?' It's hard as you age and change. But it's about bringing a wider spectrum of acceptance."

And Gwyneth is changing her own focus on order to accept herself.

She said: "For me, as I go through the aging process and really start it, I realise it's less about, 'Oh, I have this wrinkle, am I going to fix it or not?' and more, 'Do I feel vibrant?'

"I am focusing more on the fundamentals of wellness, like meditation, hydration, nutrient-dense foods and not having tons of alcohol, which I had way too much of during the pandemic!"

Despite the changes, the Goop founder wouldn't want to revisit her younger years.

She said: "I would never want to go back to my 20s, or even my 30s for that matter. I know myself, I like myself and I am so grateful for the wisdom that comes with age."