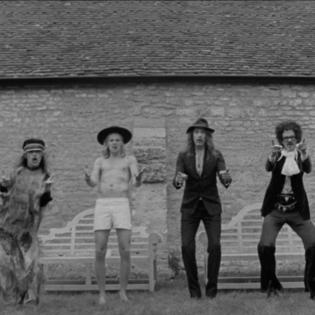 The Darkness have released the new single, 'It's Love, Jim', about an "intimate" encounter with an "extra-terrestrial goddess of otherworldly beauty."

After Justin Hawkins and co crudely declared the "time has come" to "rock like Satan is eating your private parts with a pointy fork", the band have provided another track from their eagerly-awaited LP, 'Motorheart'.

As well as promising fans they will feel "invincible all day long" listening to the new cut, frontman Justin has called on their loyal following to help them top the charts with the "high intensity, rock and roll barrage".

In a press release, he said: "This song (herein referred to as "she/her") is all about an extra-terrestrial goddess of otherworldly beauty. She's fast, powerful, not of this earth. Her sensual symphony nestles in your ear and lays mind eggs that seep confidence liquid into your brains. You'll feel invincible all day long, and everything will go right after you hear it. Yeah, so it's really catchy and should be number 1 all around the world please."

The bizarre music video captures "archive footage of the band conducting a séance as a yearning otherworldly spirit unleashes its inescapable powers through Justin, Dan, Rufus and Frankie, as well as some unsuspecting cattle outside."

Previously released tracks from 'Motorheart', which is released on November 19, include the title track in homage of a "devoted sex robot", 'Jussy's Girl', and 'Nobody Can See Me Cry'.

The 'I Believe in a Thing Called Love' group are also set to embark on a 22-date UK headline tour throughout November and December this year.

The run kicks off on November 17 at the Brighton Dome, and concludes with two consecutive nights at London's O2 Shepherds Bush Empire, starting on on December 16.

The band will be supported by Iron Maiden bassist Steve Harris' side project British Lion.

Justin said in a previous statement: "The time has come, the walrus said ... to put your f***** pants on your head and rock like Satan is eating your private parts with a pointy fork! Yes, we, The Darkness, are the f*** back on tour, praise Satan's better half ... come and party with us like it's the last orders at the last chance saloon. Which it may well be, but I wouldn't like to comment any further on that. Get in kids, it's the Darkness, wot you knows and luvs, plus British Lion - Steve Harris' top rock band who are guaranteed to blow your socks straight up your welcoming arses. What a night! Delirium! Outfits, including hats! Denim that smells of hamsters! Who doesn't want that? See you down the front, connoisseurs of the finest that life has to offer..."