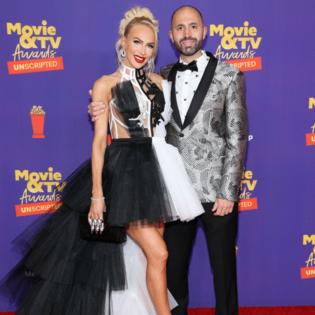 Christine Quinn's husband had to choose where to prioritise saving her life or their sons.

The 'Selling Sunset' star gave birth to son Christian Jr. in May and she admitted her tough labour left spouse Christian Richard with a difficult choice.

She said: "There was a point where we both nearly died. At the hospital, they kept going out to my husband and saying, 'OK, Christine's stable but the baby's not', and then, 'The baby's stable but Christine's not.'

"Then after the continual back and forth, they said to him, 'You need to pick one right now, you have to make the priority.' I feel horrible that he had to go through that."

But the 41-year-old tech entrepreneur refused to make a choice between his loved ones and tried to stay positive.

Asked what Christian had decided, Christine said: "Oh, he just said, "You'd better get them both."

However, Christine was back at work just a week after giving birth, which drew harsh criticism from online trolls and was keen to hit back at them.

Speaking to Britain's OK! Magazine, she said: "My message is, it was all part of my healing process. After giving birth I was in bed for four days, p***ing myself in a catheter, and I was so happy when I was able to walk to the bathroom again. I just noticed, 'OK, when I'm active I feel better.'

Christine hailed motherhood as the "most wonderful" experience, noting that little else matters now she has reached that stage in her life.

She said: "I love [being a mother], it's the most wonderful thing in the whole entire world. Once you've birthed a human, all the petty b******t in life that you used to worry about goes out the window."