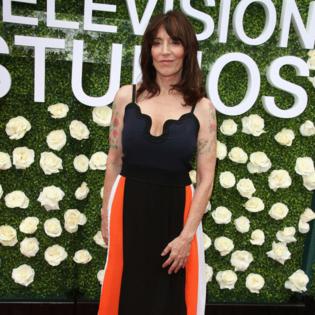 Katey Sagal has been rushed to hospital after being hit by a car.

The 67-year-old actress - who is known for playing Peggy Bundy on 'Married... with Children', and Gemma Teller Morrow on 'Sons of Anarchy', as well as voicing Leela in 'Futurama' - was struck by a vehicle while crossing the street on Thursday (14.10.21) and was subsequently taken to hospital for her injuries.

According to TMZ, the driver of the car that hit Katey did stop to try and help her before police and paramedics arrived to transport her to hospital.

The publication also claims the actress' injuries are "not serious", and she is expected to be released from hospital on Friday (15.10.21).

In a later update, TMZ said law enforcement sources had informed them the incident took place at 11:40am in Los Angeles, and that the vehicle involved in the collision was a Tesla.

Sources state the driver of the car took a left turn and didn't see Katey before the crash occurred.

The incident is currently still under investigation, but as of the time of writing no citations or arrests have been made, and there were no drugs or alcohol involved.

Most recently, Katey has been starring in 'The Conners', and also recently starred as Annie 'Rebel' Bello in the ABC legal comedy-drama 'Rebel'.

The show - which was inspired by the life of environmental activist Erin Brockovich - aired between April and June this year, but was cancelled after one season.

Katey previously said of the role: "Everybody knows what it means to 'Erin Brockovich' something. It's a verb.

"It was really interesting to me, particularly given the time we're in. She gives voice to the voiceless."

As for playing a character in her 60s, she added: "Men of a certain age have always been in leading roles, but you don't find many women. I'm in my 60s.

"Women my age can be hot, vital, vibrant and smart - all the things that we are."