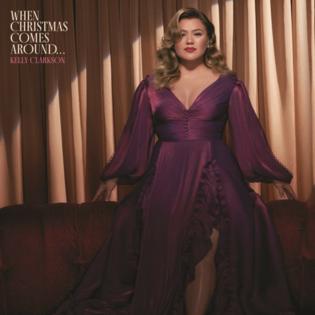 The 39-year-old singer dropped the festive track on Thursday (23.09.21), which comes as the very first song to be released from her upcoming Christmas-themed studio album, 'When Christmas Comes Around…'.

Kelly's album will be released on October 15 via Atlantic Records, and will be the star's ninth studio production and her second Christmas album after 2013's 'Wrapped in Red'.

Speaking about her upcoming record, she said: "My purpose for choosing this lyric for being the title of this project was to bring forth a sense of reality to the fact that we are probably all in very different places emotionally 'when Christmas comes around.'

"Some of us consumed with a new love, some of us reminded of loss, some filled with optimism for the coming new year, others elated for some much deserved time away from the chaos our work lives can sometimes bring us.

"Wherever you are, and whatever you may be experiencing, I wanted everyone to all be able to connect to a message on this album. Each year you may even have a new favourite depending on where you are in your life, but while change can be unpredictable there is no better time of year, in my opinion, to breathe hope into one's life and let possibility wander."

'When Christmas Comes Around…' will feature 15 tracks and will be a mixture of original songs and Christmas classics.

Kelly's record will also see her collaborate with other stars including Ariana Grande on 'Santa, Can't You Hear Me', Chris Stapleton on 'Glow', and Brett Eldredge on the previously released 2020 hit 'Under The Mistletoe', which will feature on the album as a bonus track.

The 'When Christmas Comes Around…' track list is as follows:

The Duke of Cambridge - who has Princes George, eight, and Louis, three, and Princess Charlotte, six, ...Read More

Cheryl has cancelled her 'You, Me & R&B' podcast for the BBC because it "didn't feel right" to "revisit" it following the passing of her Girls Aloud bandmate Sarah Harding.

The series for Radio 2 was set to be 12-episodes...Read More

Pink helped a terminally ill fan tick off an item on her bucket list.

The 'Who Knew' hitmaker jumped on Zoom with 63-year-old superfan Diane Berberian, who has bone cancer and is being cared for at a hospice, and made her...Read More

Meghan Trainor says having two toilets in one bathroom is "the best thing ever".

The 'All About That Bass' hitmaker recently revealed she swapped out a bidet for an additional toilet - on a whim - and she has admitted it...Read More

The 'Born To Die' hitmaker was honoured with the Artist Of The Decade prize at Variety's Hitmakers awards show at City Market Social in downtown Los Angeles on Saturday (04.11...Read More

The 48-year-old star is keen to celebrate a decade of being married to production technician James O'Keefe in September 2022, but she ...Read More