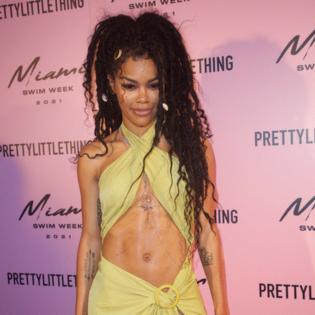 And the 'Coming 2 America' star - who released her debut single, 'Google Me', in 2008 - is set to embark on one last jaunt across North America on 'The Last Rose Petal Farewell Tour' this November.

She said on Instagram: "How lucky am I to have something that makes saying goodbye so hard.

"However, for every goodbye, God makes the next hello closer. Come out and watch me leave it all out on the stage… One last time… Just for you & as my last rose petal falls, I say farewell."

The run kicks off on November 7 in San Francisco and concludes on November 30 in Atlanta.

Teyana, who released her third and final studio effort, 'The Album', to acclaim in June 2020, announced her retirement in a lengthy post, which read: "Wow, who did that? Y'all did that! Thank you I ain't gone front in times of feeling super under appreciated as a artist, receiving little to no real push from the 'machine', constantly getting the shorter end of the stick, being overlooked, I mean the list on and on lol.. I'm retiring this chapter of my story with the comfort that i can depart with peace of mind seeing that all the hard work & passion put in was indeed loved & supported somewhere in the world! To all my supporters from day 1 & all my new ones I love you and I thank you for everything & don't worry y'all know all hustlers have the understanding that when one door closes another will open…either that or I'm pickin da locks petunia!!! So wassup. (sic)"

The 'Rose in Harlem' singer also revealed to fans on Instagram Live that she asked Def Jam to drop her from their roster for the sake of her "mental health", as she hinted at the issues she had with the record label.

Teyana - who has two young children - said: "I asked Def Jam to drop me on almost 10 different occasions. Straight to the face. Up in the building. At this point, I can't let this kill me. Granted, to my fans, I think that, you know -- and I can see how my message can come across but at the same time, I feel like it's a tiny bit selfish to say, 'What about your fans? Do it for your fans.' Baby, I gotta do it for my mental health. I have to do it for my emotional health. I have to do it for my kids so I can stay alive for my kids."

The 39-year-old actor was issued with a 16-count felony indictment for filing a false police report after he claimed he was the victim of a shocking racist and ...Read More

Ant Anstead says it is "too early" to move in with Renee Zellweger.

Oscar-winning actress Renee and the 'Celebrity IOU: Joyride' host met earlier this year on the set of his show and although their relationship has gone ...Read More

Chrissy Teigen "felt suctioned to the couch" after her pregnancy loss.

In 2020, Chrissy and her husband John Legend - who have children Luna, five, and Miles, three, together - announced they were expecting their third ...Read More

Juliette Lewis is sharing her support for the International Association of Theatrical Stage Employees (IATSE).

IATSE, the union which represents 150,000 people across the entertainment industry, including electricians, ...Read More

Boy George has accused Harry Styles of being "too scared" to play him in a Culture Club biopic.

The 60-year-old singer /songwriter claims Harry was in talks to portray him in a new movie but alleges the former One ...Read More

The 35-year-old actress and the 48-year-old actor have agreed to share joint legal and physical custody of their three children -- Noah Shannon, nine, ...Read More