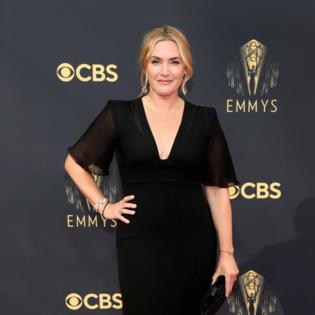 Kate Winslet believes actresses are no longer being "scrutinised" for their bodies as much.

The 45-year-old actress admitted it "means a huge amount" that she's been given so much praise for her role as vape-and-junk food-loving dowdy detective Mare Sheehan in 'Mare of Easttown' - for which she won the Outstanding Lead Actress in a Limited or Anthology Series or Movie award at the Emmys on Sunday (19.09.21) - because she was bodyshamed so much in her early career.

And Kate hopes the example Hollywood is starting to set will have a wider impact on society.

Speaking to reporters in the virtual press room backstage at the ceremony, she said: "It means a huge amount, because it makes me feel that our industry is changing. I'm honestly starting to feel that, that the shifts are happening.

"And I think we're finger pointing a lot less at women in terms of how they look, their shape. We stopped scrutinising them.

"In turn, what happens then, is that younger generations of women, who are not in our industry, start to feel OK within themselves too.

"And that's more important than anything else. Because it's up to us to be absolutely being real and representing ourselves with integrity and authenticity and celebrating each other and not judging one another. If we're not doing that in our industry, then nobody else has a hope in hell."

"So, I feel like with playing Mare, maybe we are shifting the dynamics of how leading ladies are seen on screen and that just warms my heart."

Kate also confirmed "there have been conversations" about a second season of the HBO miniseries but there's nothing definite in place yet.

She said: "Conversations are happening, but I think until scripts are in place that we can really respond to, and know what a full story of a Season 2 might be and where Mare goes.

"We're not going to match what we already did, nor should we try, but we should do at least provide something that's as captivating and entertaining as Season 1."

Halyna Hutchins' husband has said Alec Baldwin has been "very supportive" after the cinematographer was fatally shot by the actor in a horrific accident on the set of his new movie, 'Rust'.

The 42-year-old director of ...Read More

The 48-year-old actress revealed this week she had an IQ test as a child that confirmed she had a "very high" IQ of 152, but said it had "...Read More

Emily Ratajkowski wants to draw attention to "the other sides" to her experience on the set of the 'Blurred Lines' music video.

The 30-year-old model wrote an essay about her time filming the video for the hit Robin ...Read More

Alec Baldwin is "shocked and saddened" after a prop gun he fired on the set of his new movie 'Rust' accidentally fatally shot the project's cinematographer.

The 68-year-old actor has broken his silence after it was ...Read More

Erin Heatherton used diet pills to lose weight during her time as a Victoria's Secret model.

The 32-year-old star - who was an Angel for the lingerie, fashion and beauty brand between 2010 and 2013 - revealed the pressure...Read More

Jennifer Grey thinks 'Dirty Dancing' is so beloved because it's a "feel-good" film with a "serious" message.

The 61-year-old actress played Frances Houseman - who was nicknamed Baby - in the 1987 classic, and she feels ...Read More