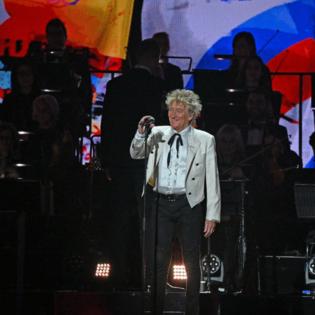 Sir Rod Stewart has joked that he would have happily played to a room full of coffins amid the pandemic.

The 76-year-old rocker has missed performing on stage so much these past 18 months that he would jump at the chance to play to any audience, even a load of coffins, because he's so "desperate" to hit the stage.

Speaking to the Daily Express newspaper, Rod - who kicks off his Las Vegas residency at The Colosseum at Caesars Palace on October 6, 2020 - said: "I'd play to a room full of coffins right now, I'm so desperate to perform.

"I've got October in Vegas looking forward to that but we really go mad next year, touring seven months out of 12."

Meanwhile, the 'Maggie May' singer recently confessed his new record is all about love and sex.

Rod unveiled his 31st studio album, 'The Tears of Hercules', last week and released the lead single 'One More Time', which is about wanting to bed a former flame after a breakup.

The music icon - who is married to Penny Lancaster - spilled: "The story behind the song is you know when you break up with somebody and the sex was amazing and you just want to do it one more time?

"That's what the song is about. It's happened to all of us I'm sure.

"The songs are more or less life stories. Unfortunately, a lot of them have got to do with love and sex on this album. Well not, unfortunately, that's the way I was feeling and they are just things that have happened to me."

The 12-track LP, which is released on November 12, marks the 'Da Ya Think I'm Sexy?' hitmaker's fourth new album of original material since 2013, with nine new tracks featured alongside covers of songs by the likes of Marc Jordan and Johnny Cash.