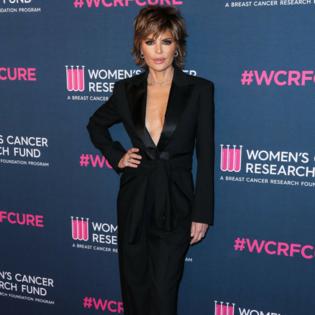 The 58-year-old reality star insisted she had always been "quite nice" about the 38-year-old entrepreneur - who recently split from the 20-year-old model - even though she suggested she didn't think the former couple's relationship was "very good".

Asked on 'Watch What Happens Live' what the worst thing she'd ever said about Scott was, she told host Andy Cohen: "You know, I have actually been quite nice about Scott Disick, and I would never say that out loud. I might have thought things that weren't very good. Listen, I tried really hard. I was really patient, and I tried really hard. We'll leave it at that."

The 'Real Housewives of Beverly Hills' star previously gave a hint that she was delighted Amelia and Scott had split.

Responding to fan account Queens of Bravo after they shared news of the break-up, she replied with a single smiling emoji.

Lisa previously revealed she was shocked and "nervous" when she found out Amelia was dating Scott after she initially claimed they were "just friends".

She said: "I guess a couple of days ago, Amelia sends me a video of Amelia and Scott on the beach."

Erika Jayne then asked: "So there's something to it?", to which she replied: "Yes."

Lisa has made no secret that she didn't approve of the couple's 18-year age gap.

The writer insisted her husband, Harry Hamlin, was "calm about it", however she was "a lot more nervous".

But she later admitted she wished Amelia had found love with a different famous hunk.