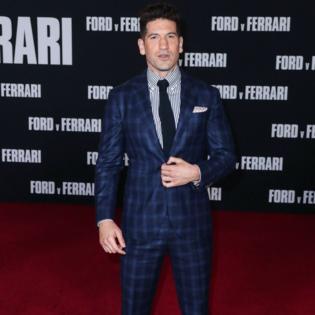 Jon Bernthal has warned fans that 'The Many Saints of Newark' is different from 'The Sopranos'.

The 44-year-old actor plays Giovanni 'Johnny Boy' Soprano, the father of Tony, in the upcoming flick that serves as the prequel to the acclaimed HBO series but urged fans not to simply expect a movie that is similar to the TV series.

Speaking on the chat show 'Late Night With Seth Meyers', Jon said: "I think people are going to go in expecting 'The Sopranos' - it's not that."

The 'Walking Dead' actor is confident that "super-fans" will enjoy the film as stories told in the series actually play out in the setting of New Jersey during the 1960s and 1970s.

Jon added: "I think that it was very smart that they set it in the past and it's a genuine prequel. You will see that when (Chase) was writing the show, he clearly understood the full history of who these characters were. And for the real super-fans, I think it is going to be so much fun."

The movie stars Michael Gandolfini as a teenage Tony Soprano, the role that was made famous by his late father James in the TV series, and Jon felt "honoured" to appear alongside him.

He said: "What Michael Gandolfini does in this movie and to be a part of his journey... I just feel really honoured that I get to walk alongside him. I think he approached it with courage and real dedication."

Michael recently admitted that he had to block out his grief for his father during filming and admits that signing up for the project had been one of the toughest decisions he has ever had to make.

The 22-year-old actor said: "[It was] probably the toughest decision I've ever had to make...

"You know, I didn't want to put pressure on myself to walk out of this feeling like I'd grown in terms of my feelings towards my dad. I just wanted to be the best actor I could be, portraying Tony in the way David [Chase, creator and writer] wanted, scene by scene. I didn't think about my grief because…well, I would have s*** the bed."