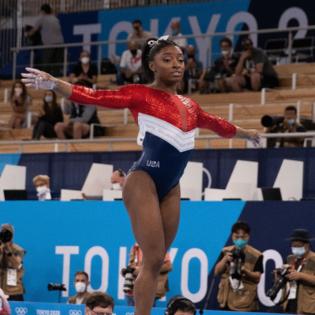 Simone Biles has pulled out of a second Olympic final to focus on her mental health.

The 24 year-old champion had already pulled out of the women's gymnastics team final at Tokyo 2020 but has now decided not to compete in the individual all-around competition on Thursday (29.07.21) and will undergo daily evaluations to determine whether she'll return for her remaining events next week.

USA Gymnastics said in a statement: "After further medical evaluation, Simone Biles has withdrawn from the final individual all-round competition at the Tokyo Olympic Games in order to focus on her mental health.

"Simone will continue to be evaluated daily to determine whether or not to participate in next week's individual events finals.

"Jade Carey, who has the higher score in qualifications, will participate in her place'

"We wholeheartedly support the decision and applaud her bravery in prioritising her well-being.

"Her courage shows, yet again, why she is a role model for so many."

Simone's decision came after she admitted her emotional state has fluctuated and she was feeling the pressure of being the "head star" at the Olympics.

The gymnast - who made a rare misstep during a vault routine earlier this week - said after withdrawing from the team final: "I'm OK, just super frustrated how the night played out but super proud of these girls that stepped up and did what they needed to do. And now we're Olympic silver medallists so it's something that we'll cherish forever.

"I'm in shape. Emotionally, that kind of varies on the time and moment. Coming to the Olympics and being head star isn't an easy feat, so we're just trying to take it one day at a time and we'll see."

Despite Simone pulling out of the final, the rest of team USA went on to secure the silver medal behind the Russian Olympic Committee who took gold, and ahead of Great Britain who bagged the bronze.

And Simone was quick to praise her teammates - Jordan Chiles, Grace McCallum and Sunisa Lee - on social media.

She wrote: "I'm SO proud of these girls right here. You girls are incredibly brave & talented! I'll forever be inspired by your determination to not give up and to fight through adversity! They stepped up when I couldn't. thanks for being there for me and having my back! forever love y'all. (sic)"

Sir Kenneth Branagh knew Kate Winslet would be a "star" from the moment they met.

The 'Death on the Nile' filmmaker assumed the actress was much older than her 17 years when she first auditioned for him and he had no ...Read More

Lil Nas X was convinced he was "going to die" when he got famous.

The 22-year-old star went though a period of anxiety when he first started making music, which escalated when his single 'Old Town Road' became a global ...Read More

The 58-year-old reality star insisted she had always been "quite nice" about the 38-year-old entrepreneur - who recently ...Read More

Miley Cyrus idolises Dolly Parton because of her "steadfast morals and values".

The 'Wrecking Ball' hitmaker has praised her godmother for both her "incomparable career" and her humanitarian work and insisted it's easy to...Read More

JoJo Siwa has insisted she'll "sing what [she] wants" on tour.

The 18-year-old star has accused Nickelodeon - who she signed with four years ago - of not allowing her to perform tracks from new musical film 'The J Team' ...Read More

Gabrielle Union was "devastated" and "broken into pieces" when her husband Dwayne Wade had a baby with another woman.

The 'Bring It On' actress and the 39-year-ol former professional basketball player began their ...Read More