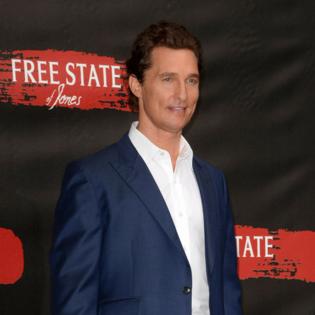 The 51-year-old actor has revealed his own father always made him address people as "sir" or "ma'am" when he was growing up, and as a child, Matthew thought the reason he had to use respectful terms when addressing adults was because they were parents.

He said: "It was when I was eight years old is when it hit me. I wanted to be a father. I remember what it was. My dad was a 'sirs,' and 'ma'ams' and 'please' and 'thank you' man, and he would introduce me to his friends.

And the 'Dallas Buyers Club' star - who is now father to Levi, 12, Vida, 11, and Livingston, eight, whom he has with his wife Camila Alves - knew that becoming a father would mean he had "made it".

Speaking to Tim McGraw on the singer's radio show, 'Beyond The Influence Radio with Tim McGraw', on Apple Music Country, he said: "I remember in my eight year old mind going, 'That's when you've made it. That's when you become a sir. That's what success is.' It hit me then, and it's never left me as the paramount example of what being a sir or being the greatest success you can be as a man."