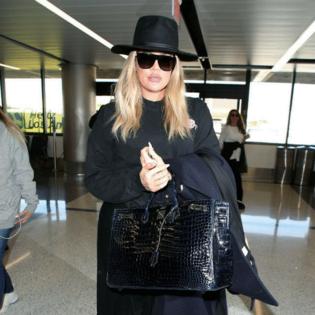 Khloe Kardashian has accused her sister Kourtney of hiding her love life on 'Keeping Up With the Kardashians'.

The 36-year-old star has claimed that she and her sister Kim have been much more open about their turbulent love lives than their older sibling on the long-running reality series.

Speaking about her other family members - including Kourtney, Kris Jenner and her younger sisters Kylie and Kendall Jenner - she explained: "I will say that Kim and I have had this conversation really openly, [and] that is we feel like we give so much and maybe others aren't holding up their end of the deal too.

"If other people are going through things and choosing not to share, that's maybe when it's unfair, but if there's really nothing else going on in someone's life, what are they supposed to share?"

Khloe suggested that Kourtney, 42 - who has Mason, 11, Penelope, eight, and Reign, six, with ex-boyfriend Scott Disick - has made a concerted effort over recent years to keep her love life out of the spotlight.

The brunette beauty's romance with Scott dominated the series in the early years, but her subsequent relationships have largely evolved away from the cameras.

In a clip for part one of the 'Keeping Up With the Kardashians' reunion, Khloe said: "You could also say Kourtney and Scott at the beginning, they had so much was about them, but maybe there wasn't as much going on in other people's lives.

"I think Kourt learned from how much the public was in her relationship with Scott. It made her not want to share future dating relationships."

In fact, Khloe revealed she was explicitly banned from discussing Kourtney's relationships.

Speaking about Kourtney's romance with Younes Bendjima between 2016 and 2018, Khloe added: "We weren't even allowed to talk about it.

"We weren't saying to put him on, but Kourtney wouldn't let us mention, even though there's paparazzi photos, so we were frustrated that we couldn't talk about what Kourtney was doing."

The 'Knives Out' actress and her husband Christopher Guest have watched "in wonder and pride" everything their youngest kid - who was previously known as Thomas - has gone through ...Read More

Maisie Williams is thinking of going back to school.

The 24-year-old actress - who was just 12 when she signed up to play Arya Stark in 'Game of Thrones' - is "mortified" that she never got to complete her education but ...Read More