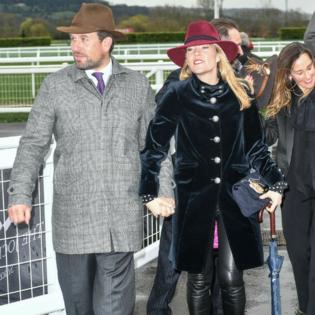 Peter Phillips and his estranged wife reached a divorce settlement agreement just hours before a trial was due to begin.

The 43-year-old businessman - who is the son of Princess Anne and her ex-husband Captain Mark Philips - split from spouse Autumn in February 2020 after 12 years of marriage and on Monday (14.06.21), a five-day hearing was scheduled to take place to determine the division of their assets.

However, the former couple - who have daughters Savannah, 10, and Isla, nine, together - released a statement shortly before the case was due to be heard confirming they had resolved the financial aspects of their split "amicably".

A statement released on their behalf confirmed: "Mr Peter Phillips and Mrs Autumn Phillips are pleased to be able to report that the financial aspects of their divorce have been resolved through agreement, the terms of which have been approved and ordered by the High Court.

"Whilst this is a sad day for Peter and Autumn, they continue to put the wellbeing and upbringing of their wonderful daughters Savannah and Isla first and foremost.

"Both Peter and Autumn are pleased to have resolved matters amicably with the children firmly at the forefront of those thoughts and decisions.

"Peter and Autumn have requested privacy and consideration for their children as the family adapts to a new chapter in their lives."

Peter had applied for restrictions on reporting of the case to stop the disclosure of financial and other personal details.

Peter and Autumn met in 2003 when they were both working at the Formula One Grand Prix in her home city of Montreal.

The management consultant had no idea Peter was the queen's grandson until she saw a picture of him on TV several weeks later.

He proposed in 2007 after seeking permission from his future father-in-law and, after Autumn converted from Catholicism to Church of England so Peter could stay in the line of succession, they tied the knot in St. George's Chapel at Windsor Castle in May 2008.