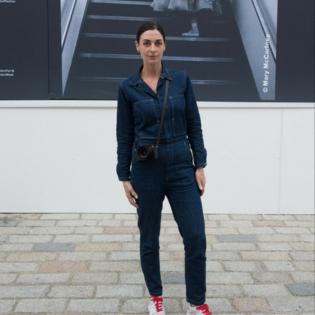 The 51-year-old photographer - who is the daughter of Sir Paul McCartney and Linda McCartney - has confessed she is very "sleep deprived" as she has been busy looking after her new pooch.

Speaking about the new addition to her family, she said: "I've got a new puppy. I'm sleep deprived. He's 11 weeks, he's from Battersea Dogs Home and he's a little ridiculous fluff ball. Very cute. He's called Murphy. It's the only name I could get all of the kids and my husband to agree on."

Whilst Paul added: "Their last dog was called Paddy so there's like an Irish theme going on."

Mary has fond memories touring with her father.

Asked what her memories of the early touring days was, she shared: "It's sort of like a family atmosphere, so we'd follow around seeing lots of music. All the crew I think are my biggest memories, playing around with the crew and the roadies. They all became family."

The mother of four - who has Arthur, 22, and Elliot, 18, with her ex-husband Alistair Donald, and Sam, 12, and Sid, nine, with her current spouse Sam Aboud - admits she is more nervous about her father Paul touring now, especially since he has added new fireballs to his set for 'Live And Let Die'.

She told the Table Manners podcast: "I had a go at him on the last tour, because he was like, it's like 'Live And Let Die' is all big pyrotechnics. And all these explosions go on [through the song] and then suddenly dad felt like around the piano he had to have flaming fireballs going around front and back and the explosions around the back and I'm like, 'Dad, really? Do you have to do that to yourself?'"