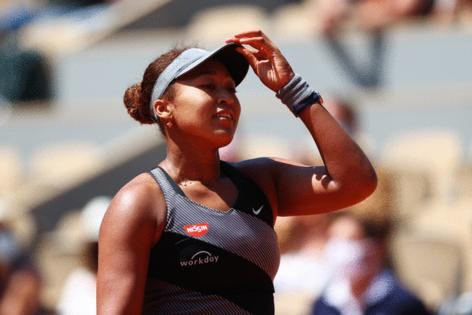 Naomi Osaka says she felt "a great amount of pressure" to reveal her struggle with mental health issues earlier this year during an ordeal that led to her withdrawing from the French Open and taking a temporary break from the sport.

The 23-year-old tennis star wrote in a first-person account for Time magazine about the series of events that started in May when she announced she would not take part in the required post-match news conferences at the French Open, citing a "disregard for athletes' mental health."

She followed through after her first French Open match and was fined $15,000. A statement from the heads of tennis' four major tournaments warned that "repeat violations" could result in "tougher sanctions," including suspension from future Grand Slam events.

So Osaka pulled out of the French Open, revealing in a statement that she suffers from depression and anxiety, and that skipping the news conferences was an attempt "to exercise self-care."

The four-time Grand Slam winner now says she wishes it hadn't come to that.

"In any other line of work, you would be forgiven for taking a personal day here and there, so long as it's not habitual," she wrote. "You wouldn't have to divulge your most personal symptoms to your employer; there would likely be HR measures protecting at least some level of privacy.

"In my case, I felt under a great amount of pressure to disclose my symptoms — frankly because the press and the tournament did not believe me. I do not wish that on anyone and hope that we can enact measures to protect athletes, especially the fragile ones. I also do not want to have to engage in a scrutiny of my personal medical history ever again. So I ask the press for some level of privacy and empathy next time we meet."

Osaka skipped Wimbledon but is planning to represent Japan at the Tokyo Olympics later this month.

"I feel uncomfortable being the spokesperson or face of athlete mental health as it's still so new to me and I don't have all the answers," she wrote. "I do hope that people can relate and understand it's OK to not be OK, and it's OK to talk about it. There are people who can help, and there is usually light at the end of any tunnel."

NEW YORK — Only two months ago, Emma Raducanu pulled out of Wimbledon because of “breathing difficulties” during a match. Most assumed it was a panic attack. Either way, it left the impression Raducanu would have ...Read More

NEW YORK — Emma Raducanu came to the New York with big dreams but a realistic travel itinerary. Unsure of her chances of getting through a qualifying tournament and earning a berth in the main draw of the U.S. Open, the ...Read More

NEW YORK — The U.S. Open holds many memories for Murphy Jensen, who has attended the tournament every year since he was 15 and watched his older brother Luke play in the junior competition.