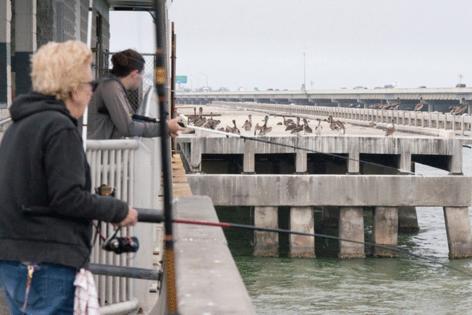 ST. PETERSBURG, Fla. — Florida wildlife officials are weighing new rules for anglers at Skyway Fishing Pier State Park after thousands of birds were entangled in fishing gear over the past two years.

Since January 2021, at least 3,300 seabirds required rescue from the pier after they were hooked or wrapped in fishing gear at the popular angling spot nestled next to the Sunshine Skyway Bridge, according to Florida Fish and Wildlife Conservation Commission data.

In response to the rise in entanglements, wildlife officials suggest prohibiting gear with more than one hook, like treble hooks and sabiki rigs, and limiting anglers to no more than three sets of hook-and-line gear within the park. It’s a proposal that has sparked a vivid debate: Environmentalists claim it’s an important step in protecting seabird species, while many anglers say it’s a premature overreach at one the state’s premier fishing spots.

“Entanglements of birds in fishing line has been occurring at Skyway Pier for many years, and seabird-angler interactions at this site occur more frequently than at other fishing piers in the state,” said Erika Burgess, a section leader at Florida wildlife commission.

Since 2016, state wildlife experts have tried reducing entanglements with more outreach and education — to no avail. “Despite those efforts, severe entanglements still occur in large numbers at the Skyway Pier. For this reason, we’re looking for fishing rule options to address this problem,” Burgess said.

Nearly 150 people tuned in to a spirted two-hour virtual discussion Monday night hosted by the Florida wildlife commission, which allowed the public to weigh in on the rule proposals before feedback is ultimately brought to the commission’s board in February.

Bird advocates largely applauded the proposed rules as a necessary action needed to reduce the number of rescues. But anglers said the new rules could be a slippery slope for more fishing restrictions, and more should be done to prevent the birds from approaching the pier in the first place, including “hazing” the birds to keep them away. Hazing is a technique to keep birds apart from a designated area by using tactics like long-range acoustics or visual scaring techniques like lasers.

“We really care about this issue, because I see it as a big precursor to moving more regulations across to other fishing piers. I would encourage the hazing or discouragement of pelicans from coming to the Skyway,” said Capt. Dylan Hubbard, president of the Florida Guides Association. “A lot of these regulations have longstanding recreational fishing impacts.”

But, environmentalists say, the time for that has passed, and the issue has reached near-crisis levels. In 2018, for instance, the nonprofit Friends of the Pelicans was launched to reduce the number of bird entanglements at the pier and across the state. A full-time rescuer was even hired two years later to patrol the pier five days a week and assist birds that become snagged or hooked in fishing line. The rescuer’s presence, paired with an increase in pier attendance since 2020, has led to an increase in bird entanglement reports recently, according to wildlife officials and bird rescue groups.

When Doug Peffer opened his big-game butcher shop, deer hunters around the intersection of Beaver, Butler and Lawrence counties could pick from perhaps a dozen full-service processors to carve their harvest.

Bird flu did not cause a large waterfowl die-off last week on a southern Minnesota lake, the Department of Natural Resources determined after testing some of the dead birds.

More than 125 geese and ducks were found dead ...Read More

A relaxed guy, Joe was in his airy Twin Cities home studio the other day. On his easel ...Read More