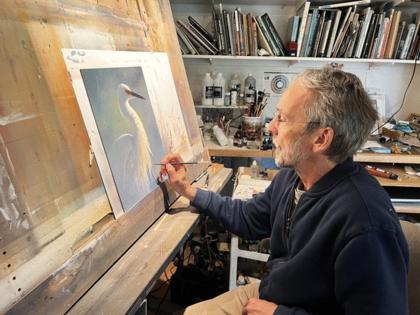 A relaxed guy, Joe was in his airy Twin Cities home studio the other day. On his easel was a nearly finished painting of a snowy egret, while scattered about the room's perimeter in more-or-less organized fashion were tools of the artist's trade: brushes, paints, books, posters and prints.

Through the room's large windows an autumnal panorama of trees, water and sky revealed itself, while chickadees flitted about a feeder a short distance from the home Joe shares with his wife, Milla.

"We're getting ready to go to North Dakota duck hunting,'' Joe said, "so I'm putting together things for that.''

"We'' in this instance means Joe and his brothers Jim and Bob, the other members of a familial painting trio (hautman.com) that together has won the coveted federal duck stamp competition 15 times, a record that, unless the brothers clone themselves, likely will stand forever.

Three of seven kids who grew up in St. Louis Park down the street from a couple of other siblings who made a name for themselves in the art world — Joel and Ethan Coen — Joe, Jim and Bob Hautman were part of a large family.

Their mother, Elaine, painted professionally, and their father, Tuck, who instilled in his children a love of nature and of waterfowl and waterfowl hunting particularly, also was handy with a brush.

Yet while the artistic successes of Joe, Jim and Bob might have been predicted due to their lineage, their commercial achievements — their designs grace everything from coffee mugs to curtains and bedspreads — were less certain.

"None of us are really any good at self-promoting,'' Joe said. "Normally in the art world you have to be a bit of a salesman. You have to promote yourself with gallery owners to get your artwork shown. Thanks to the duck stamp contest, we didn't have to do that.''

That's because the contest, which is held annually to determine the design of the $25 federal waterfowl stamp hunters are required to purchase to pursue ducks and geese, is such a big deal that winning it guarantees the kind of prominence (and some fortune) that marketing geniuses can only dream of.