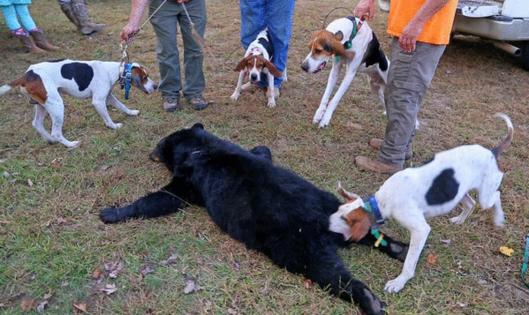 For the second consecutive year, South Carolina sportsmen killed a record number of black bears during the state’s often-criticized bear hunting season, a two-week period when the shy bruins are stalked in the mountains and on parts of the coast.

Hunters killed 174 bears in 2022, eclipsing last year’s state record of 169 bears harvested, according to data from the S.C. Department of Natural Resources. The vast majority were killed in the mountains of Pickens, Oconee and Greenville counties, an area of the state where bear-hunting is a long-standing tradition.

“It was a big season for the bear harvest,’’ said Tammy Waldrop, a DNR biologist who keeps track of bear hunting in the mountains.

While the number of hunters registering with the DNR to kill bears has steadily increased, Waldrop suspects the robust harvest relates to where acorns the bears feed on could be found.

White oak trees dropped large numbers of acorns — which black bears prefer over nuts from red oaks — but only in certain areas, she said. That caused bears to move about more and to congregate in some areas, she said.

“It gave more opportunity for these bear hunters to encounter them,’’ Waldrop said.

A hunter in Oconee County shot and killed the largest bear, a 536-pounder during the part of the season when dogs can be used to stalk bears. The state record is a bear weighing 609 pounds.

The state’s season runs the last two weeks in October. In the mountains, hunters can use dogs with tracking collars to stalk bears for one of the two weeks.

South Carolina allows bear-hunting in a handful of counties for multiple reasons. It’s seen as a way to keep the bear population in check in a growing state. And it is a cultural activity that goes back generations among hunters. Bear hunts are allowed only in mountain counties and on the northern coast near Myrtle Beach.

Animal welfare activists have long criticized South Carolina and other states that allow hunters to shoot and kill black bears, saying it is an unnecessary and cruel trophy hunt that may eventually threaten bear populations.

South Carolina has an estimated 1,000 to 1,600 black bears, found mostly in the mountains but also along the coast west of Myrtle Beach. Many of those bears are believed to move back and forth across the border from Georgia and North Carolina, which also have bear hunting seasons.

Nearly three dozen states have fall bear-hunting seasons, according to the Humane Society of the United States. But not everyone is happy with that.

A group called Bear Defenders is involved in efforts nationally to halt bear hunting in the United States.

“We are on a mission to pioneer a road-map that will lead people through the process of ending bear hunting in their state,’’ the Bear Defenders’ website says.

Many animal welfare groups, including the Humane Society, are particularly concerned about the use of dogs with tracking collars to find bears, which they say is an unfair chase. Sometimes dogs will drive bears into trees, where the animals are shot. In North Carolina, dogs were recently reported chasing bears through developed areas.

Bear parts also are sometimes harvested and sold on the black market. In South Carolina, the DNR has made cases against men who have tried to sell bear parts, although it was not clear what states the parts were harvested in.

“The Humane Society of the United States is opposed to the trophy hunting of black bears,’’ the society’s Wendy Keefover said in an email. “Trophy hunters’ primary motivation is to kill black bears, not for food but for photo opportunities, and to obtain and display bear parts, including, heads, hides, claws and capes — even if the meat is ultimately consumed.’’

Charles Ruth, the big-game coordinator for the DNR, said he believes the state has struck the right balance in allowing a limited black bear harvest for two weeks each year. The DNR says hunting keeps the population in check, and that there are plenty of bears to hunt. The rising number of bear kills in recent years suggests the population is healthy, or even growing, he said.

Bears are known to wander into backyards, looking for food. They also are sometimes hit by cars, particularly in the increasingly developed Myrtle Beach area.

“We get a lot of nuisance complaints about bears (eating) crops, getting into trash cans, bird feeders, etc.,’’ Ruth said. “And understanding that the population is increasing, from a management standpoint, you don’t want too many bears. There is a cost of having bears.’’

In the past two decades, the number of black bears killed during hunting season in South Carolina has risen from 27 to 174, DNR statistics show. And 2022 marks the sixth consecutive season in which more than 100 black bears were harvested by hunters. Before 2017, more than 100 bears had been killed in a single season only once.

Black bears are native to the southeastern United States and are the largest land mammals found in South Carolina. An adult male weighs 150 to 350 pounds, on average, in South Carolina, but older bears can weigh 400 to 500 pounds, the DNR says. The animals are omnivores, meaning they eat both meat and plant material, such as nuts and fruit. They are generally not considered aggressive, preferring to stay away from people unless there is food nearby.

DNR records show the number of hunters has increased, and more people from outside South Carolina are beginning to hunt here. But it also remains a tradition for long-time residents.

While animal welfare groups decry bear-hunting, many involved in the sport say it is part of their way of life, particularly in the mountains. Bears have been historically hunted to provide food and clothing for mountain residents, even though that is no longer the objective in many cases.

In 2016, The State took a rare look at the closed world of bear-hunting. Many hunters said they saw the sport no differently than any other type of hunting. Hunters often spend two weeks in the fall in camps in the mountains, sitting around fires and sharing stories about their encounters with black bears

Phillip Gosnell, a bear hunter from Landrum, said the sport is both a tradition and sustainable. From his observation, bear populations are increasing, he said. Because the DNR prohibits shooting the smallest bears or females with cubs, the population is in good shape, he said.

Gosnell harvested a nearly 600-pound black bear in 2017, one of the largest ever killed during the hunting season.

“Used to, I didn’t see any bears, but now, they are just everywhere,’’ he said. “They are kind of aggravating to put up with. They are a nuisance. Some are anyway.’’