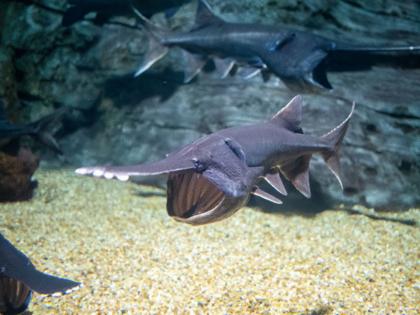 A dozen boats shot out of the launch together in the early light like a school of orcas on the hunt. They headed north, upstream, to a quiet backwater of the Mississippi River, where they began setting thousands of feet of net. It was early fall, and cold.

Tim Ohmann, a fisheries specialist with the Minnesota Department of Natural Resources, took a sniff of one of his gloves. "I still have some of that paddlefish smell on me," Ohmann said. "We're going to see some paddlefish today."

Spend enough time netting fish on the Mississippi and you can start telling species apart by their odor alone. Muskies, sturgeon, catfish and carp all have their own subtle differences, Ohmann said.

"Oh yeah," agreed Kayla Stampfle, the DNR's invasive carp field lead who was in the boat with him. "Walleye and walleye fingerlings even smell different."

The worst-smelling fish in the Midwest is a dead shad, Ohmann said. Paddlefish are among the best, emitting more of a pleasant aroma, he said.

Stampfle and Ohmann were on the river near La Crosse, Wis., that day to catch invasive silver and bighead carp. But their operation — conducted every year with a handful of other state and federal agencies — offered a rare chance to pull up some of Minnesota's native paddlefish. In this state, the ancient, gentle river giants now exist mainly around the Mississippi.

Even in a place obsessed with fishing, where opening day of the season is practically a holiday, almost nobody sees a paddlefish. Other than the 12 days a year when they are on display at the DNR pond at the State Fair, they exist more as a rumor. Outlandish and otherworldly, they haunt the state's river bottoms with 2-foot-long noses, beady eyes and shark-like fins. Their gaping mouths look like they could swallow a basketball whole.

If any paddlefish were caught that day in September, it would be a good sign that their population was still hanging on here at the northern edge of their range, even as dams have cut them off from many of the gravel beds they need to spawn. It would be telling if, even with all the pollution and development brought by the population growth of the last 200 years, Minnesotans could still coexist with one of the oldest species in North America.

First, Ohmann and Stampfle needed to set the nets that would corral all the fish in that corner of the river. The two hunched over near the front of the boat, feeding the net into the water. Buoy after buoy plopped down on the surface in a straight line, several hundred feet long. Using carabiners, they attached it to the nets set by the other boats to form a single giant barrier.

For more than a century, paddlefish have been all but ignored in Minnesota. Despite their size and their roe — which has become a prized caviar — commercial fishermen have never targeted them here, as they have in places such as Indiana and Oklahoma.