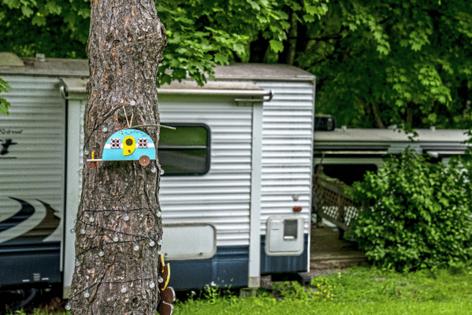 In 2020, Pennsylvanians discovered that the outdoors were always open despite business closures and social distancing related to COVID-19. Doors started reopening last year, but new economic data shows the public's rediscovery of the outdoors continued as substantial increases were made in outdoor spending.

Pennsylvania revenue from outdoor recreation increased 22% in 2021, adding $13.6 billion to the commonwealth's economy and some 2,000 jobs in the outdoors sector. It accounts for 152,000 jobs, and 1.6 percent of the commonwealth's Gross Domestic Product (GDP). The data was included in a national report released Wednesday by the U.S. Bureau of Economic Analysis, which measured the outdoor recreation economy for the nation, all 50 states and the District of Columbia.

Pennsylvania — the fifth most populous state — had the sixth largest outdoor recreation economy supported by its many natural assets, generally diversified economy and strong retail, manufacturing and tourism sectors, the report said.

"This latest round of economic data proves again that the excellence of Pennsylvania's outdoor recreation is the product of our remarkable landscapes and strong partnerships," he said in a statement. "Outdoor recreation continues to be a thriving and significant industry within the commonwealth, and this data helps us better understand what we are doing well, while also providing guidance on where we can grow this industry for its own sake and to improve the lives of Pennsylvanians."

According to the Bureau of Economic Analysis report, recreational vehicle camping makes up the greatest single contribution to Pennsylvania's outdoor economy, exceeding $700 million in value added in 2021, an increase of 17% over the previous year. RVing is followed by substantial economic contributions from boating and fishing ($555 million); hunting, shooting and trapping ($354 million); and ATV and motorcycle riding ($304 million). Overall, recreational activities are spurring economic productivity in supporting industries as well, including nearly $4 billion in travel and tourism activity and more than $1 billion in regional recreational trips made by Pennsylvanians.

Triggered by the pandemic and empowered by new recreation technologies, including advances in gear and distribution of information, recreation activities are diversifying in the state. Mr. Reigner said working from home has made recreation-based lifestyles easier and more popular, encouraging some remote workers to relocate to communities with abundant and accessible recreational opportunities.

Nationally, outdoor recreation generates $862 billion in economic output, accounting for approximately 3% of all jobs in America.

Jessica Turner, president of the Outdoor Recreation Roundtable, a trade association, said new data showing significant growth in outdoor recreation underscores the importance of investment in public lands, waters and infrastructure for all types of recreation in Pennsylvania.

"From the creation of jobs and increased profit for small businesses in local economies, to larger boons to the state's economy, this sector is a consistent driver, even in times of economic uncertainty," she said. "The strength of the outdoor recreation economy reflects what many in the industry have long known to be true: there are infinite benefits that come from more people spending time outdoors, and they'll only grow with continued investment."

In a statement issued Thursday at the 2022 United Nations Climate Change Conference in Egypt, participants emphasized the need to increase access to nature as a way to protect, conserve and restore the natural environment. The statement echoed Mr. Reigner's description of what is happening in Pennsylvania, citing examples of restoring, regenerating and conserving biodiversity as ways of improving social, political and personal health.

The BEA report suggested that Pennsylvania is on the right track, but showed areas where the commonwealth is lagging, particularly in wages. Although Pennsylvania ranks seventh nationally in earnings of outdoor recreation workers, its rate of compensation growth is 38th among all states. Payment for outdoor recreation workers averaged about $44,623 in 2021, about 57% of earnings of all salaried workers in Pennsylvania, who averaged $77,884 in that year. Mr. Reigner said this as an area where Pennsylvania can improve.

Mr. Reigner is the first director of Pennsylvania's new Office of Outdoor Recreation, created this summer by the Department of Conservation and Natural Resources. In addition to planning growth opportunities for outdoor recreation, the office was launched to increase the outdoor economy by facilitating collaboration among government agencies, businesses, communities, economic developers, user groups and recreation resource managers.