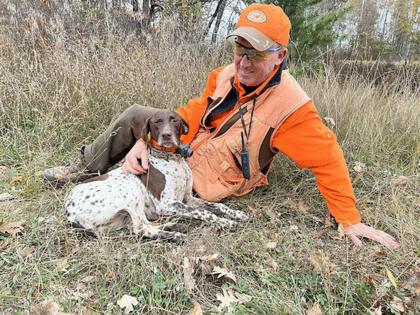 IN NORTH CENTRAL MINNESOTA — While it's possible to hunt ducks without a dog, and pheasants and even ruffed grouse, chasing woodcock without a pointer out ahead, or even a Labrador or other flushing dog, is not so much unproductive — though it is often that — as it is joyless.

I was thinking about this a short while back while Bill Marchel, Rolf Moen and I roamed a labyrinth of gravel backroads about an hour north of Brainerd.

On similar past adventures, we had been accompanied by two and sometimes three dogs. But on this day, we had with us only a single prize fighter, Rolf's 5-year-old German shorthair, Sally.

The description is apt, a prize fighter, because, as challenging for the wing shooter as woodcock and, yes, grouse hunting can be, the birds' pursuit is even more taxing — far more so — for dogs that must bust through alder thickets, gray dogwood coverts and forearm-thick aspen stands at ground level.

Which is why now, in midafternoon, between hunts, Sally was sleeping soundly while we drove to another hunting spot, our third that day.

A migratory forest inhabitant with an upside-down brain, the woodcock, also known as the timberdoodle, is an ideal game bird for a pointing dog to pursue.

This is because woodcock, once scented by a dog that subsequently freezes, or "points,'' oftentimes holds tight while an accompanying hunter moves ahead of the stationary canine to flush the bird and (with luck and skill) shoots it in midair.

Shorthairs, Brittanies and other so-called continental breeds are said to be woodcock specialists, and there's general agreement here. More so than setters and other pointing breeds that work with their heads and noses held high, shorthairs, among other, similar-working canines, tend to hunt with their noses closer to the ground, and thus are more likely to locate and point woodcock.

The challenge by contrast that ruffed grouse present to dogs and hunters places these birds in a sporting class all their own.

PITTSBURGH — Fish stories just aren't what they used to be. To be believed, you'd better have live-streaming video, a digital scale and a lawyer. Now big-money fishing tournaments are even turning to metal detectors to ...Read More