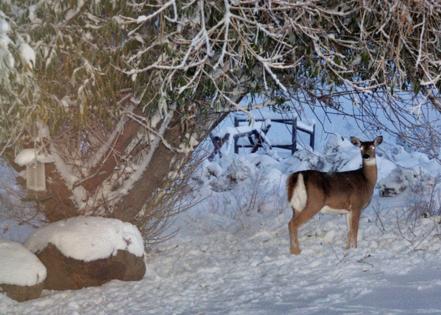 A new report from the Pew Charitable Trust shows climate change, along with other human-caused factors, is altering wildlife migration patterns in Idaho and across the West, leading to less healthy animals and population declines.

The Wyoming Migration Initiative used information from GPS collars on deer, elk, pronghorn and other migratory animals to create the report for Pew. It found that climate change, habitat loss, fences, roads and development are impacting the way wildlife move between summer and winter ranges.

“Most of the information in the (report’s) maps that you see is information we didn’t have even five or 10 years ago,” said Matt Skroch, Pew’s project director for Public Lands and Rivers Conservation, in a phone interview. “That’s what’s new and exciting here. There’s so much more information available today about how animals migrate.”

According to the Pew report, rising temperatures linked to climate change have resulted in drought, extreme wildfires and change in the timing and location of plant growth.

“A lot of people don’t associate wildlife movement with climate change,” Kathy Rinaldi, the Idaho conservation coordinator for the Greater Yellowstone Coalition, said in a phone interview. “With a warming and drying climate, we’re already starting to see changes in precipitation, which ultimately changes vegetation.”

For migrating herbivores, that can mean less food or poorer quality food. In some cases, vegetation may stop growing in places it previously grew, or it may grow earlier or later in the season than it traditionally did due to changes in temperature.

All of this can mean migrating animals arrive to their usual feeding grounds to find there isn’t enough to eat. When vast areas are impacted by wildfire — something that has become more frequent in recent decades, with larger, hotter fires more common now — the same thing can happen.

“Animals pass that migration knowledge down,” Rinaldi said. “Mothers pass it onto their calves and on down the chain based on knowledge within the herd. They don’t know (if an area) burned.”