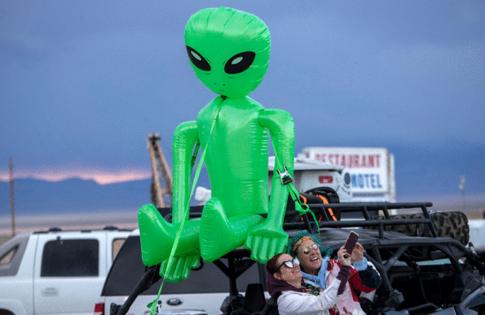 News that Joe Kruchowski had sold his bait shop and was moving to Area 51 didn't take me by surprise, though I was unnerved when I learned he wouldn't be traveling in his '76 AMC Pacer.

Instead, he will trek more conventionally, in a motor home, behind which, on a trailer, will follow his Nissan Juke NISMO RS, a rocket on wheels.

Area 51, as you will recall, is in Nevada, and Joe and his wife, Kelly, have purchased a gold mine there.

As career changes go, this is a whopper, from peddling fatheads and shiners to crushing rocks. But then, as Barry Andrew Hay, front man of Golden Earring, croons in "Radar Love,'' day or night, the newsman sings his same song.

So, who's to say in these wacky times that whopper-like life changes aren't warranted.

Baitwise, Joe has been the man since he bought Northwoods Bait and Tackle in 1993. The shop is perched hard by Hwy. 53 in Cook, a northern Minnesota burg that is home to slightly more than 500 residents. Joe might peddle more rainbow chubs than anyone in the state, and anglers vectoring north from Chicago, Kansas City and Des Moines, as well as the Twin Cities, are drawn to his shop like sinners to an altar, eager especially now in midsummer to swap creditworthy plastic or cold cash for nightcrawlers, leeches and, especially, insights into where-they're-biting.

Kelly, in many ways Joe's spiritual adviser, also will soon be an Area 51 resident. The two were in the Nevada desert last winter and on Joe's days off from flipping burgers at the Little A'Le'Inn (more on this later) in Rachel, Nev., he and Kelly enjoyed watching America's Top Guns dogfight high overhead with their counterparts from allied nations worldwide. And when the red-white-and-blue, contrail-trailing F-15s, F-22s and F-35s ignited their afterburners, Joe and Kelly knew well that window-shattering sonic booms would quickly follow, and they covered their ears.

Our soon-to-be Minnesota expats first met when they were 10 years old and Kelly had traveled from her southern California home to Chisholm, not far from Cook, where Joe lived, to visit her grandmother. They met again in their teens. But they didn't become a couple until about six years ago, when Kelly walked through the door of Northwoods Bait and Tackle and, as Joe puts it, "We both knew we would be in love forever."

Iron Range-bred and born, Joe will be leaving the only home he has ever known when he and Kelly head west. He has forgotten more about bait than most people know, and for many winters, piling through deep snow, he trapped bobcat, fox, fisher, marten and coyotes, and one time fashioned a bed spread from 20 beaver pelts he had fleshed, spread and dried before sewing them together.

A dog is recovering from injuries after fighting a black bear on a trail near Ketchum, the Idaho Department of Fish and Game said in a news release last week. It’s the latest in a series of black bear conflicts in the ...Read More

During the pandemic, as the world isolated from COVID-19, Tatiana and Mario Cruz got hooked on kayak fishing.

When they lost their jobs — Mario as a chauffer and Tatiana as an event organizer — the Puerto Rican couple...Read More

Such is the reasoning behind a burgeoning effort by the Twin Cities group Wilderness Inquiry (WI) to sponsor what ...Read More

Hungry for lobster? You can soon catch your own.

The two-day lobster miniseason in Florida runs Wednesday and Thursday, and thousands of people will visit the Keys and other spots in the state for a chance to bag their ...Read More