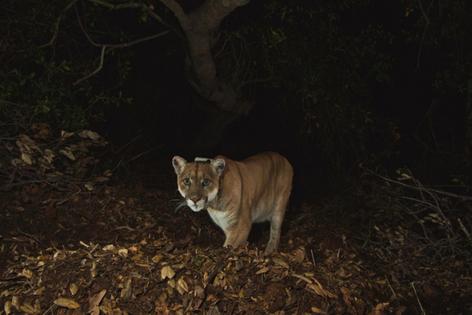 LOS ANGELES — Whoever drove the car or truck that last week killed the mountain lion P-89 on the 101 Freeway in Woodland Hills — about 60 years ago, that driver would have been in line for a reward, a government atta-boy bounty of as much as $75 (more than $730 today).

California was not fussy about how you killed a mountain lion, just so long as you did. Over nearly six decades, from 1907 until 1963, the state paid out more than half a million dollars for 12,461 mountain lion corpses.

Today, we mourn publicly when even one Felis concolor is killed by human hands or, as happens far more often, by tires.

P-22, the most famous Hollywood feline since the MGM lion, is a beloved pop culture phenom, the alpha cat of an apex species. He has survived rat poison. He has been caught and treated for mange and freed to flaunt his handsomeness around Griffith Park. He is the star of songs, of artwork, of T-shirts and an ugly Christmas sweater. He is the subject of at least two books, one called “The Cat That Changed America” — changed it so much, at least the Southern California part of it, that private donations small and very large make up most of the $90-million “kitty” for a wildlife crossing being built over the “death zone” 101 Freeway that had locked mountain lions into confined habitats.

The crossing is named for ardent animal lover Wallis Annenberg, who, with her family foundation, donated $25 million to build it. Hours before the groundbreaking in April, another mountain lion, P-97, was hit and killed not far away, on the San Diego Freeway.

And in the Legislature, the same state that paid out bounties for dead mountain lions is looking over a bill that could build at least 10 more wildlife crossings across California.

In the 30 years between 1960 and 1990, the mountain lion went from being a “predator” with a bounty on its head — poisoned, shot, caught in fanged traps, hunted with dogs — to a permit-only trophy-hunting animal to a special protected mammal. In sum, the fewer mountain lions that were left, the more protections they began to get.

How did it happen? How did a creature despised as a pest and a varmint, whose slaughter was once cheered and officially rewarded by California, become a darling and an icon?

Mountain lions, like wolves, were miscast in our Western sagas as savage and indiscriminate killers. In fact, they’d rather give humans a wide berth, except where humans have served up a menu of livestock: sheep, cattle — a captive, easy-prey buffet compared with the mountain lion’s usual chase-and-catch deer entrees.

Hunters had many reasons to shoot first. Kill it before it kills you or your livestock; kill it for its handsome pelt and head or the bounty it brought; or kill it because humans, not mountain lions, had first rights to kill deer.

They attended the same suburban Twin Cities grade school, middle school and high school, and in recent years have been students together at Minnesota State Mankato — where their goal is to turn that school into a ...Read More

The "No Junk Fish Bill" carried this year in the Minnesota House by Rep. Jamie Becker-Finn would have required the Department of Natural Resources to evaluate rough fish designations and whether any nongame species need ...Read More

Former Boise State University football star Leighton Vander Esch is facing criticism online after posting a video of himself feeding a wild black bear while on a recent fishing trip in Idaho.

Vander Esch, who grew up in ...Read More