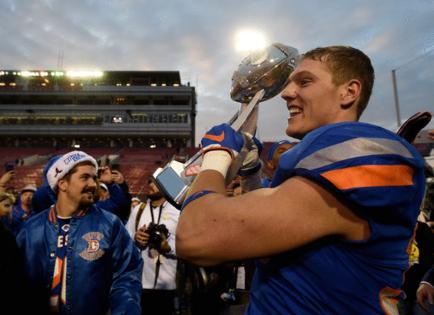 Former Boise State University football star Leighton Vander Esch is facing criticism online after posting a video of himself feeding a wild black bear while on a recent fishing trip in Idaho.

Vander Esch, who grew up in Riggins and is in his fifth year as a linebacker for the Dallas Cowboys, posted the video on Instagram last week as part of a post thanking a White Bird-based guiding company for a weekend fishing trip.

“Definitely a couple firsts this weekend. Not often you get to feed a wild bear and get a picture with two sturgeon in the same frame,” Vander Esch wrote. “Amazing weekend with family making memories that will last a lifetime!”

The video shows Vander Esch holding a fish by the gills with his arm outstretched toward a black bear in the water. The bear stands up on its hind legs, bracing on a boulder for balance, and bites onto the fish’s tail. Vander Esch lets the fish slide from his grasp before the bear turns to head back toward shore.

The video earned him accolades from dozens of commenters, including Cowboys teammates Donovan Wilson and Dalton Schultz, Miami Dolphins cornerback Byron Jones and professional rodeo athlete Tyson Durfey. But others took Vander Esch to task for feeding a wild animal — something wildlife experts and the Idaho Department of Fish and Game strongly discourage.

“Dude, that’s super irresponsible of you. It teaches bears to not be afraid of humans, which gets them killed. You should be ashamed,” user @kthomasgarcia wrote in a comment.

Fish and Game regularly urges against feeding bears, warning that bears who become used to human food begin to seek it out, creating the potential for dangerous conflicts.

The Idaho Statesman reached out to Vander Esch’s agent, Ron Slavin, who said Monday that he was unaware of any criticisms of Vander Esch’s video.

Roger Phillips, spokesperson for Fish and Game, told the Idaho Statesman in a text message that feeding a bear is not illegal in Idaho. But he added that feeding wildlife, with the exception of bird feeders, “is typically a bad idea.”

“When wildlife associates people with food it frequently causes problems, as we’ve seen throughout Idaho with animals large and small,” Phillips wrote.

‘A fed bear is a dead bear’

Another commenter on Vander Esch’s video pointed out that the bear he fed could soon become a nuisance for others fishing in the area — which could ultimately cost the bear its life.

“That is terrible. Big fan, but think. Think of the river guides who camp on those beaches and have to deal with those slightly domesticated bears … Fed bear, dead bear,” wrote @carljamesisgod.

The adage that a fed bear is a dead bear is a common one in Idaho, where officials earlier this year euthanized a female grizzly and her yearling cub in eastern Idaho after they became habituated to human food.

Idaho Fish and Game last week said it had set a trap for a black bear near Ketchum that had become habituated to food and started trying to enter vehicles. If the bear is caught, it will be euthanized.

The agency also warned of black bears becoming habituated to human food at Baumgartner Campground near Pine and in the Coeur d’Alene and Hayden areas, according to news releases.

“Perhaps the most important thing to remember is to never intentionally feed bears,” a Fish and Game explainer on avoiding bear conflicts said. “It just takes one time for a bear to associate humans with food. Eventually, these bears lose their natural fear of humans and they can become more aggressive in getting human foods. This creates a threat to human safety that cannot be tolerated, and the bear is destroyed. A fed bear becomes a dead bear, and the person who provided it with food is responsible.”

Challenging as it is to prove, it's likely that Minnesotans travel farther and more frequently to fish than do anglers from any other state.

Five of these adventuresome Minnesotans are profiled here. With fishing rods in ...Read More

LIGONIER, Pa. — Spring is for trout. Cold, tinted snowmelt flowing past shoreline skim ice. Circular ripples spreading outward from a perfect cast. A subsurface flash, a tug on the line and the thrill of guiding a crafty...Read More