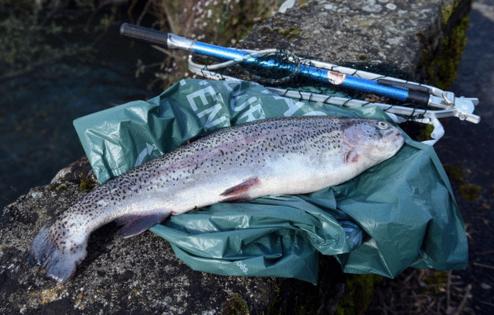 LIGONIER, Pa. — Spring is for trout. Cold, tinted snowmelt flowing past shoreline skim ice. Circular ripples spreading outward from a perfect cast. A subsurface flash, a tug on the line and the thrill of guiding a crafty trout to the streambank or a waiting net.

For many Western Pennsylvanians, lazy summer days are for bass lying under the lily pads. Unless you're Jordan Stranko of Greensburg. Long after most anglers have left the streams, the Saint Vincent College student is still catching big trout in Westmoreland County.

How big? On late spring and early summer days when many anglers would have been happy to land an 18-inch largemouth, Stranko was wrestling with rainbow and golden rainbow trout that could be measured in feet instead of inches. His biggest in the last month was 27 inches, 7 pounds.

"Well, it's not really a secret," he said, smiling and wading wet with no other anglers in sight on Loyalhanna Creek at Ligonier. "I know where the fish are and I go there when most people have stopped fishing for trout."

His process is actually a little more informed than that.

"This is a Delayed Harvest [Artificial Lures Only] area that gets stocked with big hatchery breeders. It's catch-and-release here until June 15 when you can keep three a day," he said. "Most guys have given up on trout by then, so most of those fish are still in there. I know they're there and just keep fishing for them when everybody else is gone and I'm the only one on the water."

In sections of 24 Pennsylvania waterways where Delayed Harvest Artificial Lures Only or Miscellaneous Special Regulation rules apply, Fish and Boat makes use of 2- to 3-year-old hatchery breeders that are beyond their reproductive years. In the Keystone Select Stocked Trout Waters program, some 10,000 hatchery retirees measuring from 14 to more than 20 inches are stocked in addition to 9- to 11-inch fish.

The fly and spin anglers permitted to fish year-round in Delayed Harvest/Keystone Select waters do it on a mandated catch-and-release basis except from June 15 to Labor Day, when the limit is three trout of mixed species 9 inches or larger. It's a conservation harvest predicated on a belief at Fish and Boat that most of those big trout are likely to succumb to summer waters that grow too warm or during typical winter fish kills.

Pennsylvania's southwest corner has three Keystone Select stretches on Meadow Run (Fayette County), Loyalhanna Creek (Westmoreland) and the upper Delayed Harvest area on Laurel Hill Creek (Somerset). Granted, some of the big fish may have been illegally poached or have migrated to more accommodating waters, but Stranko says thousands of the big bruisers remain long after many anglers have given up on trout.