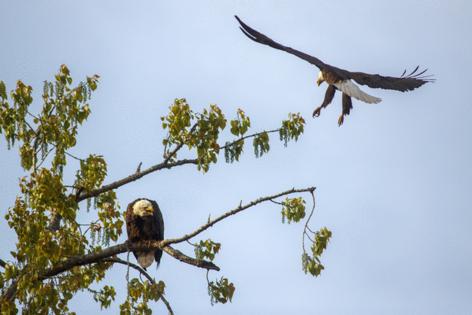 Following a push, a precipitous fall and rescue with the help of a sibling, one of the fledglings has been permanently removed from the nest for veterinary care and recovery.

In their third successful year of mating, the 7- to 8-year-old eagle dad and older mom have watched their pair of nestlings grow from fuzzy balls of feathers to juveniles nearly the size of an adult — black in color, perpetually hungry and squabbling for nest-bowl dominance.

Bald eagle fans from around the world have watched them, too, via a live-streaming camera system supplied by PixCams, the Westmoreland County security monitoring company that built the equipment used to observe another eagle nest, in the Hays neighborhood of Pittsburgh.

A week ago Sunday, as the young birds perched on a limb of the sycamore that holds their nest high above the Monongahela River, one fledgling flapped its wings, knocking the other off the limb. It tumbled 15 feet to another branch as steel plant manager Don German watched on the live-stream feed at his desk.

"The one that was practicing flying is a little more developed than the other," he said. "It glided off camera when [the weaker bird] fell."

Mr. German and the other webcam controllers panned the area searching for the lost eagle. When they noticed its sibling perched on a branch and intently watching one area, they focused their attention there.

"Monday morning, we're looking and all of a sudden part of a wing sort of comes into view," he said. "It's sitting there right under the camera. You could see its wing feathers were all messed up and most of its tail feathers were gone. It got damaged in the fall or on the ground."

As the healthy sibling watched from its perch about 100 feet from the nest, the injured bird tried to hop up to the next branch and failed. It tried again. Three times it attempted to work its way back to the nest. Throughout the fledgling's ordeal, the parents didn't call out or attempt to help, which is common among raptors.

ESTES PARK, Colo. — A bull elk with mesh fencing entangled in his antlers was tranquilized near a busy traffic intersection in Estes Park, where police and wildlife officers freed the beast of his burden.