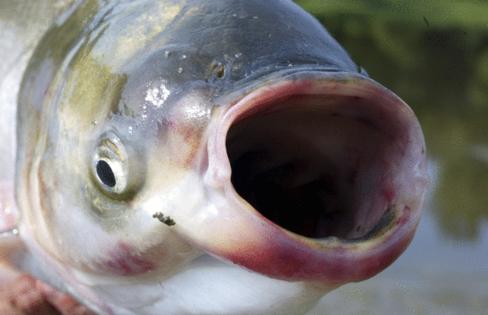 This spring, an invasive silver carp bolted up the Mississippi River — right to the edge of where a researcher says the state has a chance to block the species from advancing any further.

The fish, tagged by the Minnesota Department of Natural Resources, took advantage of high water in May to slip around locks and dams as the river swelled and spillways opened.

A DNR report released to environmental groups this week showed the fish traveled about 35 miles against the current, from La Crosse, Wis., to just north of Winona, in less than a day.

It's the furthest north a tagged silver carp has trekked in the Mississippi, though some of the fish and other invasive carp species have been caught upstream, said Grace Loppnow, an invasive fish consultant at the DNR.

The progress of this carp's journey means it's time to block them at Lock and Dam 5, just northwest of Winona, said Peter Sorensen, a professor at the University of Minnesota who has made a career of studying carp. Sorensen's own data showed the invasive carp in the actual pool of that lock, with only a gate preventing further movement.

According to Sorensen's research, this lock is the most likely place where a fish deterrent would work, because there isn't a large spillway that carp could use to swim around the structure. Sorensen and a group of engineers have developed one idea that might work there — a wall of bubbles and noise known as a "bioacoustic fish fence" that would span the lock pool and make the carp retreat.

But the DNR hasn't updated its plan for carp in years and hasn't evaluated Sorensen's plan.

Loppnow said that the agency needs time to convene the people with an interest in the carp problem, and that it needs to evaluate a range of solutions, not just Sorensen's idea.

The Stop Carp Coalition asked the DNR to start updating its plan for the invasive fish back in 2020, the same year that 51 silver and grass carp were pulled from waters near La Crosse.

He had hopscotched north from Sebring between dwindling patches of trees until he came to Celebration.

If Florida was an entire world, ...Read More

BOISE, Idaho — A fungus that causes a fatal illness in bats has been detected in Idaho for the first time, federal and state officials confirmed.

MINNEAPOLIS — In Herman Melville's "Moby-Dick,'' the antagonist, Ahab, is so fixated with pursuing the great white whale of the book's title that Ahab's obsession results in his demise, and not in a pleasant way.

A biologist along the coast of the Outer Banks in North Carolina snapped a shot of a peculiar visitor hovering over the water.

It was a large black and white seabird with a black face and yellow bill. It’s usually not ...Read More