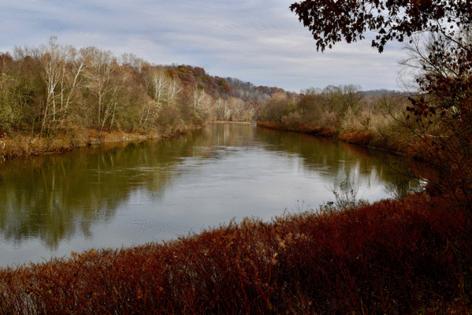 Richard Nicholson, of Connellsville, was fishing the Youghiogheny River in October when he set the hook on a 34-inch, 18.1-pound walleye that set a new state record. In September, Joe Granata, of Monaca, boated a 64.8-pound flathead catfish in the Ohio River on the West Virginia side. Upstream just a few miles, it would have crushed the current Pennsylvania flathead record.

Monsters still exist in Pittsburgh's rivers, giant fish that could snap a fishing rod and challenge some of Pennsylvania's greatest record-setting catches. Some of the world's biggest fish are featured weekly on "Monster Fish," a TV series on NatGeo Wild, a joint venture of the National Geographic Society and Walt Disney Co.

Taking advantage of its parent company's 133-year affiliation with museums, NatGeo has sent a "Monster Fish" exhibit on a tour of American natural history museums.

"Monster Fish: In Search of the Last River Giants" is installed through April 10 at the Carnegie Museum of Natural History in Oakland. Including video and hands-on interactive activities, the exhibit features life-size sculptures of rare giant freshwater fish from around the world.

"The TV show came from my interest in big fish all over the world," said Zeb Hogan, the show's host, in a phone interview. "One reason I love the exhibit is it puts the research all in one place."

While in his early 20s, as a grad student from the University of California, Hogan studied the ecology and conservation of large freshwater fish. In 2005, he worked with fishermen in Thailand to catch an ecologically threatened Mekong giant catfish. Nine feet long and 646 pounds, it was listed by the Guinness Book of Records as the largest exclusively freshwater fish ever caught.

"You'd look at the fish and say, 'With all these people around, I can't believe this fish could be living here,' " said Hogan. "This was when I started asking questions. How much food does a fish like that eat? How does it impact its environment? How many could a waterway support?"

Recreational angling groups keep track of record bass and other fish legally caught with a hook and line, but not on a global scale using scientific methodology.

"No one had done that aspect of questioning before," he said. "And the fundamental questions: Do freshwater fish get this big all over the world, and are they equally threatened?"

Further research found that big fish are not as big or abundant as they once were, according to commercial fishing records from the 1800s and early 1900s.

"There are some fish stories that are hard to believe, but it's clear that human impact has affected these fish," Hogan said.

In Pittsburgh waters, the native shovelnose sturgeon once grew up to 6 feet in length feeding on small fish, larvae and crustaceans. But it was driven out by mine and mill pollution. The blue catfish was pushed farther down the Ohio and Mississippi rivers by the same toxic releases. It is considered one of North America's fiercest aquatic predators and grows up to 100 pounds in northern waters.

"It might look like nothing can harm the biggest fish in the water, but there are a lot of reasons that life is hard for them," said Hogan. "They eat more and in some cases can deplete their food stock. When they get big they're worth a lot of money, and they don't deal well with dams. In the U.S., we've generally cleaned up our rivers a lot in recent decades, but it can take a long time for long-living fish to rebound."

Hogan said he hopes full-size sculptures of the "Monster Fish" experience will help people to realize how big the fish in their region used to be, and what might still be possible.

"Even though the exhibit has a global focus, it has local significance," he said. "You can't just go down to the local river and find them in a natural environment. I hope the museums are making an effort to connect the exhibit to their local rivers."

Plans are underway to bring Hogan to the Carnegie Museum of Natural History to speak at a "Monster Fish" assembly in the spring.

For more information on "Monster Fish," go to carnegiemnh.org.

Now, as the peak of the whitetail rut approaches throughout Minnesota, many bucks will roam mindlessly in search of does, and some of these unsuspecting animals will appear Saturday beneath the stands of lucky or skilled (...Read More

Another big fish has been pulled from the waters of Western Pennsylvania, and it may be a state record.

A 34-inch, 18.1-pound walleye caught in the Youghiogheny River on Oct. 28 by Richard Nicholson of Connellsville, ...Read More