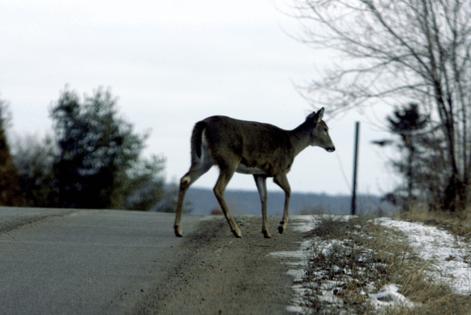 In 2020-21, the national animal-vehicle collision rate increased, but technology is helping to reduce the number of deer killed by commercial truckers.

New data from State Farm Insurance shows the average U.S. driver has a 1 in 109 chance of colliding with an animal, and 70% of reported animal collisions involve deer. The most recent State Farm analysis estimates nearly 1.9 million insurance claims for animal collisions were filed nationwide from July 1, 2020, to June 30, 2021 — almost 200,000 more claims than in the previous 12-month period.

West Virginia drivers have the worst odds of hitting a deer: 1 in 37, according to State Farm. Pennsylvania was third on the list but dropped to a tie for fourth with Michigan in 2020-21, with the chance of crashing into a deer at 1 in 54.

Insurance researchers have calculated that each deer-vehicle collision costs Americans more than $8,000, including vehicle damage, insurance claims, medical bills, funeral costs, removal of carcasses and loss of the recreational value of the deer. Near misses are not recorded.

There are likely fewer near misses by trucks. Lytx, a tech firm that provides safety and routing options for companies operating big rigs, smaller trucks, buses, vans and other commercial and public sector vehicles, keeps track of animal activity and other hazards for thousands of commercial fleets and more than 1.4 million drivers worldwide.

The San Diego-based company combines and analyzes algorithms from machine vision and artificial intelligence technologies to advise drivers in real time about road hazards including seasonal, lunar and weather-related increases in animal crossing activity. The cab-mounted Lytx units record the vehicle's location and speed as well as sudden braking and swerving. Its database adds more than 200,000 new driving events each day, and its collision reports are included in the annual State Farm deer-vehicle collision advisories.

In 2014, Lytx commissioned a study by the Virginia Tech Transportation Institute that evaluated the potential benefits of equipping all heavy trucks and buses in the United States with the Lytx system or similar safety products. The research found that the systems could prevent an average of 727 fatal truck and bus crashes (20.5% of the total in the study period) and save 801 lives (20% of total fatalities). Use of the equipment could reduce an average of 25,007 injuries in truck and bus crashes (35.2% of the total) and save 39,066 injuries (35.5% of total injuries) each year, according to the study.

A 35,000-pound 18-wheeler hauling 45,000 pounds of cargo traveling at the truck speed limit at night is not as nimble as a car. Swerving would be more dangerous than hitting the animal, and the driver may not be able to stop within the space brightened by the headlights, said Kyle Warlick, a client intelligence analyst with Lytx.

Because of the bulk of their vehicles, drivers of commercial rigs are less likely to be killed or injured in animal collisions, Mr. Warlick said. "[Drivers] might not even know they were in a collision until they arrive at their destination."

Now, as the peak of the whitetail rut approaches throughout Minnesota, many bucks will roam mindlessly in search of does, and some of these unsuspecting animals will appear Saturday beneath the stands of lucky or skilled (...Read More

Another big fish has been pulled from the waters of Western Pennsylvania, and it may be a state record.

A 34-inch, 18.1-pound walleye caught in the Youghiogheny River on Oct. 28 by Richard Nicholson of Connellsville, ...Read More

Aaron Dohmen of Hastings didn't think he would be raking leaves on opening day of Minnesota's traditional deer season.

But by 11:15 a.m. Saturday he was standing at a DNR checkpoint along the Mississippi River, admiring a...Read More

It isn't avian pox — which infects some 230 species of wild and domestic birds — that has depleted Pennsylvania's wild turkey population. It isn't West Nile virus, a disease that is devastating the closely related ...Read More