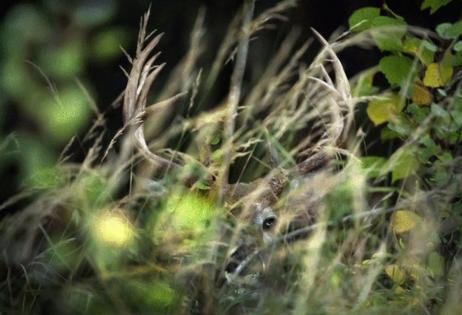 Aaron Dohmen of Hastings didn't think he would be raking leaves on opening day of Minnesota's traditional deer season.

But by 11:15 a.m. Saturday he was standing at a DNR checkpoint along the Mississippi River, admiring a dandy eight-point buck he harvested on a small patch of land he owns near New Trier. In a matter of minutes, a volunteer veterinary student removed lymph nodes from the deer's neck. The procedure put Dohmen in compliance with a mandatory, opening-weekend testing requirement to help state wildlife officials fight chronic wasting disease (CWD). For data purposes, he pinpointed the location of his kill for the DNR and was free to go.

"I couldn't be happier because it's a good day and there's still time to do yard work,'' Dohmen said.

He and other hunters interviewed at the checkpoint near Lock and Dam No. 2 were complimentary of the DNR's effort to control the disease. "Hopefully a lot of people bring in their deer,'' Dohmen said. "I'd like to know if this is becoming a problem.''

Mandatory CWD testing was a significant part of Opening Day. The collection effort affected hunters in six special zones stretching from the Bemidji area to far southeastern Minnesota in the Driftless Area.

But at Afton State Park and throughout other areas of the state, some 400,000 hunters — young and old alike — were able to marvel once again at the movement of wild deer during the rutting season. It's the one time of the year when bucks, especially, aren't afraid to strike a pose or chase a doe in the wide open.

Gene Pedersen, 15, of Oakdale, was one of the lucky ones. The freshman at Tartan High School underwent a serious heart procedure on Wednesday. When doctors cleared him to hunt two days later, his father, Matt, planned for a no-frills outing at Afton State Park. The family had been chosen earlier to participate in a special youth hunt at Afton. Park Ranger Nick Bartels provided Gene a low-key spot beside a trail on Trout Brook.

Seated in a folding chair beside a fallen tree, the boy heard his father, Matt, whisper: "Buck.''

Gene looked in the direction of his father's stare. When he raised his 12-gauge shotgun to aim, the deer disappeared. Before Gene could lower his gun, a larger buck appeared. As the mature eight-pointer lowered its head and walked toward him, it came to a momentary stop within 30 yards. Gene fired once and the buck fell in its tracks. It was the biggest of three deer he has ever shot.

"He made it easy this year,'' Matt Pedersen said of his son. "It was right there. We didn't have to track it.''

It isn't avian pox — which infects some 230 species of wild and domestic birds — that has depleted Pennsylvania's wild turkey population. It isn't West Nile virus, a disease that is devastating the closely related ...Read More

An Idaho hunter discovered an unusual bird while on a hunting trip on Oct. 7 in the Cecil D. Andrus Wildlife Management Area near Cambridge.

The tragic accident that occurred on a New Mexico movie set Oct. 21, when actor Alec Baldwin fired a vintage revolver he apparently thought was loaded with blanks, or unloaded, has prompted a lot of social media commentary...Read More

IN SOUTHEASTERN NORTH DAKOTA — Imagine yourself in this state a couple of years back. It's October, and you're in a small-town bar in a county that's home to fewer than 2,000 people.

The sun has set, dinner is a memory,...Read More