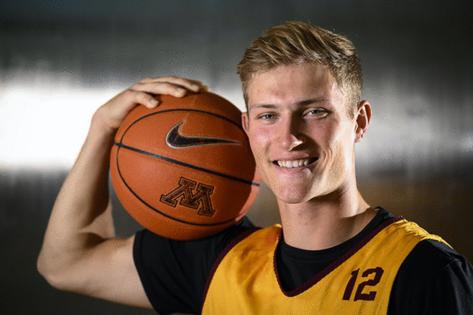 The William & Mary grad transfer actually had his eye on Minnesota and the Land of 10,000 Lakes even before new Gophers coach Ben Johnson was hired in March.

Playing in the Big Ten was a plus for Loewe, but returning to his Midwest roots as an aspiring pro fisherman was a top priority as well.

"There are a lot of great opportunities up here," said Loewe, a Fond du Lac, Wis., native. "A lot of great fishermen. I've been connecting with some of the better anglers around Minnesota, which has been cool."

One of eight transfers to join the Gophers, Loewe adds leadership, three-point shooting and defense to the backcourt. He transformed from a rarely used reserve to an all-league guard in the Colonial Athletic Association.Not bad for someone who was better known in high school for his fishing skills than his jump shot.

At 15, Loewe won Wisconsin's Bass Federation High School Championship against 30 competitors in 2015. By then, he already had his own custom-made fishing rods.

It all started when his father, Jason, taught him to fish at Green Lake in Ripon, Wis. His younger brother, Jackson, is now following in his footsteps after winning a youth tournament there in June.

"I fished a ton of youth tournaments and was successful doing that," Loewe said. "Really enjoyed it. The older I got after going to high school, most of my time was spent with basketball in the winter and summer in AAU. But whenever I had time off, I would go fishing. That's kind of what I do."

Even at William & Mary in Williamsburg, Va., Loewe bought his own boat and fished in the offseason. His commitment to developing on the hard court was evident as well. He went from averaging 1.1 points as a freshman to 16.2 his senior season, earning all-league second-team and all-defensive honors.

As sportfishing captain Markus Medak stood in the wheelhouse of New Lo-An on a moonless, cloud-choked morning that painted the Pacific Ocean sky ink-black, he thought he saw a faint light.

But it couldn’t be, right?

CONNEAUT, Pa. — Long and gray, like a big bent cigar, the muskellunge hurdled from the water, throwing its tail to the right and its head to the left in a single motion. It spit the silver lure from its mouth, splashed ...Read More