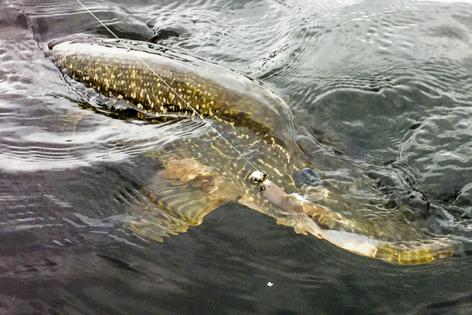 CONNEAUT, Pa. — Long and gray, like a big bent cigar, the muskellunge hurdled from the water, throwing its tail to the right and its head to the left in a single motion. It spit the silver lure from its mouth, splashed back into the lake and was gone.

"Muskie!" hollered Nico Summaria as his friends turned to see slack line spooling back onto his reel.

The action started soon after a late morning start Sunday on Conneaut Lake, where so far this year Summaria has boated 20 muskellunge in the 20- to 30-inch range, as well as Northern pike up to 25 inches. Earlier this month, Summaria sent a photo of himself cradling a 46-inch muskie caught and released Oct. 10. I was happy to accept an invitation to join him and his cohorts on their next muskie trip, not knowing we would be overwhelmed with Northerns.

As water temperatures throughout the region dropped to the mid-60s, muskellunge, the long-revered fish of 10,000 casts, have been predictably surfacing with more regularity. Other fishermen, including Summaria's fishing buddies Rob Quinn and Clayton Evans, recently had muskellunge encounters on Conneaut Lake. An angler reported catching and releasing 12 muskies in two weeks at Pymatuning Reservoir, also in Crawford County. Muskellunge from 20 to 51 inches were landed, lost or located in Western Pennsylvania lakes including Kinzua Dam, Tionesta, Edinboro, LeBoeuf, Woodcock Lake, the tailrace of the Shenango Reservoir, Lake Arthur, Crooked Creek, Conemaugh, Loyalhanna and Youghiogheny River Lake. Muskie catches were reported on the Allegheny River system as far south as Harmar, where a 30-incher was released in late September between the islands under the Pennsylvania Turnpike bridge.

Friends since high school, Summaria, Quinn and Evans, all of Peters, are big fish hunters. Their strategies, tactics and gear are focused on finding and wrestling in trophy-size freshwater Leviathans that they photograph and carefully, respectfully release. Their videos are posted at The Daily Hook Set on Instagram and YouTube.

Muskellunge are the alpha predators wherever they live, usually solitary and scattered. Most anglers troll for them to cover large expanses of water, weaving zig-zag patterns over submerged features and swinging close to wood and weed beds.

Summaria, who grew up in a family with a camp at Conneaut, has a cartographer's knowledge of the 929-acre lake and its underwater labyrinth of weeds, sandbars and drop-offs where the muskellunge lie in wait.

"They're ambush predators hiding down in vegetation, at the edges of channels through the weeds and at ledges," he said. "I'd rather cast than troll [and] we go where they're most likely to be. Often, but not always, it's big, heavy lures and long casts. It's a lot of casting. Your arms get tired, but we're doing pretty well this year."

The pitch-and-reel strategy works particularly well at Conneaut because of its ancient origin.

Before the building of impoundments, Conneaut was inland Pennsylvania's largest lake, gouged by a glacier some 14,000 years ago. Most lakes dammed for recreation are drawn down in the fall to reduce weed growth. Conneaut Lake was dammed and raised in the early 1800s as part of a proposed north-south auxiliary to the cross-state Pennsylvania Canal. The plan dissolved with the advent of the railroad and the dam, located on the canal route in Meadville, was abandoned. Since then the lake has drained naturally through its original outflow southeast through Geneva Marsh to French Creek, which itself was reversed by the same Upper Paleolithic glacier.