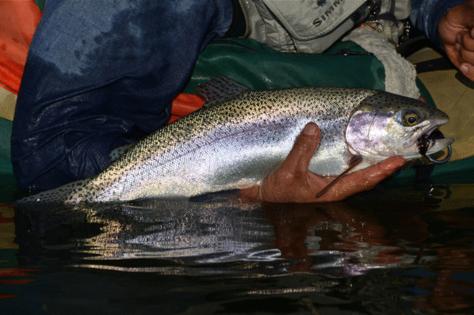 Daniel Ritz expected to scream, shout and throw his hands in the air with joy and excitement when he reeled in his final fish. Instead, catching the Eagle Lake rainbow trout — the last catch of a monthslong journey across the West to learn about native trout species — felt almost anti-climactic.

"I was looking for a sense of closure or achievement," Ritz said in a phone interview. "But that was never going to happen. The whole point of this is you learn a little bit and you want more. It just makes you more curious."

Ritz, a Boise resident, caught and released the Eagle Lake rainbow trout and 17 other trout species as he took on the Western Native Trout Challenge, an endeavor that pushes anglers to land trout in their native waters. It's part of an initiative to conserve species whose habitats have been damaged by invasive species, wildfire and other challenges, like the Eagle Lake rainbow.

Ritz started his attempt this spring, traveling to 11 other Western states at a breakneck pace to complete the challenge on Sept. 24. But the 33-year-old said he's far from finished learning about native North American trout and the threats they face.

"My whole life has been changed," he said.

Ritz attempted the hardest tier of the trout challenge, called the master caster level. It requires anglers to catch and photograph 18 species across all 12 states included in the challenge: Alaska, Arizona, California, Colorado, Idaho, Montana, Nevada, New Mexico, Oregon, Utah, Washington and Wyoming. There are 20 native trout on the list, leaving only a little room for error for the master caster.

All along the way, Ritz cataloged his journey in stories for Trout Unlimited. He plans to write a book about the challenge, which only a handful of other anglers have completed at the master level.

The first few weeks of the challenge took Ritz to extremes. He started in Nevada with a Lahontan cutthroat, headed to a wildfire-charred landscape in New Mexico to land a Gila trout and fished still-frosty waters in Alaska, where he hit one of the major snags of the experience. Arctic char, one of the species he planned to catch, eluded him. Still, he took advantage of Alaska's endless summer daylight to fish a 14-hour day with Eric Booton, the sportsmen coordinator for Trout Unlimited in Alaska.

In a phone interview, Booton said he was impressed with Ritz's ability to adapt to the Alaskan landscape.

COLUMBUS, Ohio — White-tailed deer are 'highly susceptible' to infection from the novel coronavirus, according to a study published in December in the journal Nature.

More than one-third of 360 deer swabbed across nine ...Read More

Make a call to the Department of Natural Resources office in Tower, in northeast Minnesota about 20 miles southeast of Ely.

Ask for the person in charge of wildlife.

Chances are you will get a recording advising you to ...Read More