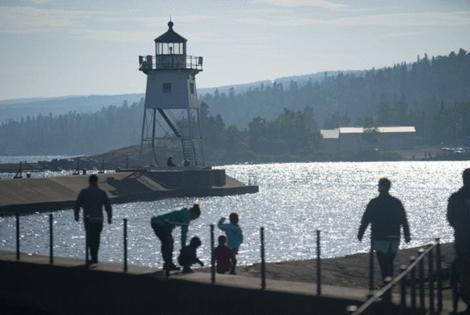 GRAND MARAIS, MINN. — Santiago, the protagonist in Hemingway's novel "The Old Man and the Sea,'' was a fisherman with a long run of tough luck, 84 days without a catch. Yet his knowledge of fish and how to pursue them carried him through the drought, and ultimately he hooked the marlin of a lifetime.

He is a fisherman and has been most of his 86 years. He can tell you about catching walleyes on Leech and especially Winnibigoshish, about the crappie bite on a favorite lake north of Grand Rapids and about tramping alongside creeks and rivers that spill into Lake Superior, fishing for brook trout with his dad.

But Pete Harris is not old. Or doesn't seem it.

And he's never gone 84 days without catching a fish.

Visitors to Grand Marais this summer who strolled its Lake Superior shoreline at dawn might have spotted a wool-clad boatman leaving the village's quaint harbor in a vintage aluminum 14-footer.

The incongruity of a man alone, bent at the tiller of such a small boat motoring onto such a large lake, might have given pause, though the craft's downriggers, two to port and one to starboard, would have suggested the man's intent.

"Maybe I'm a loner,'' Pete said the other day. "But a lot of times it's simpler to go by yourself if you can't find someone to go with you who is really into fishing.''

But one sentence sums up ...Read More