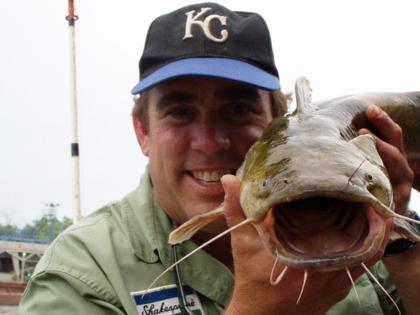 "The fishing is better this year," said Tim Reddinger, an experienced flathead hunter and owner of the Reddi Bait fishing shop near the confluence of the Beaver and Ohio rivers in Bridgewater. "I've seen a lot of big cats in the last two or three weeks. Go out any night of the week and you'll see people fishing."

Part of the reason, he said, is the recent uneven weather. Rain, sunshine, 85 to 60 degrees on the same day while the water temperature is dropping.

"Perfect weather," he said. "Rotten for us but good for catfish. High water strips up everything, and in the water column everything is disbursed."

Flatheads are durable, environmentally tolerant and will eat anything, dead or alive. They are indistinguishable from the fossils of their forebears 15 million years ago. Reddinger said improved water quality is improving the population of prey species and fattening up the catfish. So far, in Reddi Bait's statewide Big Fish Fight Club tournament, the biggest cat is a 34.22-pounder taken in Pittsburgh.

As catfish grow bigger, and perhaps more respectable, a catch-and-release culture has grown among the anglers who hunt them. And they're getting better at it.

"The skill level is like I've never seen before," said Reddinger. "Some of them have become super good. They know the fish's haunts. Downtown Pittsburgh is unbelievable catfish territory. At night you can see the running lights from all the boats. There's submerged structure throughout the Pittsburgh Pool — logs, concrete, twisted cables, iron bars, sunken barges. Flatheads love it. It's one of the prime areas in the state."

"But the best thing about this, the thing I've always liked," said Reddinger, "is that the average guy can go out and possibly catch that 50-pounder on a $35 rod."

Except when the average guy is a woman. One of Reddi Bait's best customers is Tara Toth of Fallstone, Beaver County. She recently learned to fish from her adult son.

"He got me into catfish. For a couple of years we shore-fished, and it was so exciting reeling in a really big fish," she said. "I started getting better gear. I bought a boat last year. I didn't know everything about it, but I'm learning."

Last week, she said, was her best week ever. She got engaged and caught a 25.7-pound catfish.

"We had just gotten onto the [Ohio] river and were throwing our lines in," said Toth. "I was baited up with skipjack [cut tuna]. We weren't there for 5 minutes and my rod just bowed. I have a 16 1/2 -foot Smoker Craft — it just turned my whole boat. We had five rods in the water and they were going under. It was a pretty tough fight. I caught a bigger one last year, but this one was friskier. We released it so somebody else can catch it."

"He's been a bass fisherman, but not so much anymore," she said. "It's nice going out on the boat together, just the two of us. He's learning. But it's kind of nice because I'm the one holding the big cat."