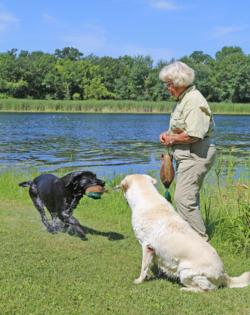 Delaney was born in the home where she lived nearly her entire life — on the grounds of Armstrong Ranch, her parents' hunting preserve, kennel and mink and fox farm that once spanned 360 acres.

Every August, Armstrong Ranch's present-day 80 acres is the site of Game Fair, which the Delaneys founded in 1980.

An animal lover who as a young girl kept as pets every creature from raccoons to skunks, Delaney at age 5 headlined her first dog act in 1943 at the Northwest Sportshow in Minneapolis.

When she returned to the same stage a year later, the Minneapolis Tribune gushed, "The tiny daughter of Fred Armstrong put her two beautiful black Labradors through a retrieving act that literally brought down the house.''

In the nearly six decades that followed, Delaney and her dogs would appear at sports shows from New York to Los Angeles. She often drove herself, pulling a trailer full of Labradors, setters, pointers and Chesapeake Bay retrievers.

Confident she could train nearly anything with four legs, she once added a pair of half-coyotes-half-huskies to her act. While at a Seattle sports show in 1960, she bought a bear, which she put in her trailer before driving to the next show in Los Angeles.

"We were married here at the ranch in 1960 and returned a year later to take over the kennel,'' Chuck Delaney said. "In the meantime, for a year, we lived in California. After our wedding in Minnesota, we loaded Loral I's five dogs and the bear into the trailer. At one stop, in Denver, Loral I brought the bear into a restaurant. That was interesting.''

As a teenager, Delaney had been part of a water skiing act in which she stood at the top of a pyramid of skiers. Wanting to ratchet up the act's "wow'' factor, she trained the bear to ride a surfboard with her, along with a Chesapeake Bay retriever and a golden retriever.