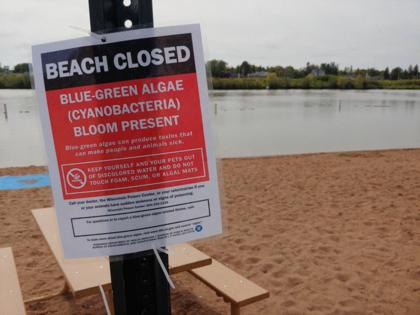 DULUTH, Minn. – Until recently, the cold, pristine waters of Lake Superior have not been ideal habitat for harmful algae blooms. But with warming waters and changing precipitation patterns, the potentially hazardous pond scum is becoming more common on the big lake.

This year at least six algae blooms were reported on the western arm of Lake Superior, according to the Wisconsin Department of Natural Resources. Cyanobacteria, also known as blue-green algae, took advantage of warm surface water and ample sunlight to develop into soupy masses along shorelines from the Apostle Islands to Thunder Bay in July.

Most recently, a bloom was spotted last week at Barker's Island beach in Superior, Wis., closing the swimming area to the public.

Contact with algae blooms can be toxic to humans and pets and can also disrupt marine life. Though the blooms are commonly found on warmer, shallower lakes, their presence on Lake Superior has researchers concerned for the long-term outlook of a massive body of water that is already among the fastest-warming lakes in the world.

"Are things changing in the lake, and are we seeing a shift?" said Kaitlin Reinl, a researcher at the University of Wisconsin Madison who has extensively studied algae blooms in Lake Superior. "It could make us sick, but the lake is also a very important cultural and spiritual resource. How might this change access for future generations?"

The first documented algae bloom in Lake Superior was in 2012, and there have been blooms reported in several years since. Though researchers are trying to determine if there were blooms before 2012, the effects of climate change makes it more likely that they will continue to occur.

"Blooms are most likely to accumulate in the nearshore zone when waves are calm, which allows buoyant cyanobacteria to float at or just below the surface, LaLiberte said. "Gentle winds toward shore can then blow the cyanobacteria toward the beach, concentrating them into cloudy green water conditions."

In 2012 and 2018 the lake saw major storms — which are becoming more common — that led to a huge increase in nutrients in the lake and caused larger algae blooms to thrive.

Fifty-five miles out in the Gulf of Mexico, Rosibel Molina slid off the back of a pink boat into the blue-green water. She steadied her spear gun.

“Remember, we saw that shark here yesterday,” Molina said to her ...Read More

The season is allowed for three years under an ...Read More