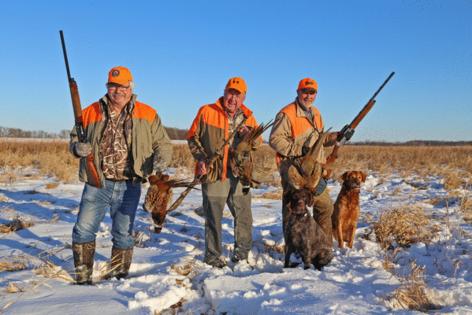 Such were the words the other day of Fred Froehlich, describing why for some 40 years he has enjoys mentoring young hunters — a critical role for established hunters if the pastime is to continue at present participation levels, more or less.

"To continue the legacy of hunting, we have to get some of these kids away from their smartphones and into the outdoors,'' Froehlich said.

Froehlich, of Nicollet, a small town (population 1,250) on the south end of Swan Lake in southern Minnesota, is a longtime sportsman- and citizen-activist.

In the latter role he is mayor of Nicollet, now in his fourth term.

As a conservationist, he has served even longer. Among his many contributions to wildlife and wildlife habitat, he is a president of the Nicollet Conservation Club, perhaps the most active and dedicated such organization in Minnesota and maybe the nation.

It was in his role as a club leader that a recent mentoring opportunity arose.

"One of my assignments was answering e-mails we received,'' Froehlich said. "One was from a mother from north-central Minnesota whose son wanted to go to a college near where he could hunt ducks, which was his passion.''

Gustavus Adolphus in St. Peter was one possibility, and the young man ultimately made that college his choice. Nearby Swan Lake would provide some duck-hunting opportunities, Froehlich suggested, and there would be others not far from St. Peter.

But questions arose that weren't answered during the student's orientation week at Gustavus. Such as: Where could he keep his shotgun? His waders? His canoe?

Fifty-five miles out in the Gulf of Mexico, Rosibel Molina slid off the back of a pink boat into the blue-green water. She steadied her spear gun.

“Remember, we saw that shark here yesterday,” Molina said to her ...Read More

The season is allowed for three years under an ...Read More

The state Game Commission wants your turkey count. Pennsylvanians who participated in a public survey on wild turkey sightings in July and August are encouraged to report their sightings by Monday.