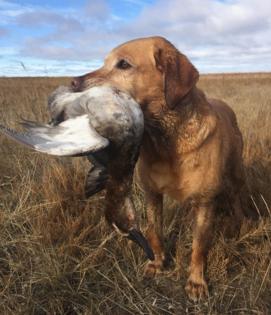 If there are no dogs in heaven, then when I die, I want to go where they went." — Will Rogers

At Game Fair earlier this month, nearly 3,000 dogs attended. Some were big, others small, and most were at least as smart as their human partners — partners being a more accurate descriptor than "masters,'' because it's the furry, four-legged end of a leash that usually calls the shots, and rightly so.

I was thinking about this because the temperature was expected to moderate significantly, with a high last Saturday of 73. This welcome change will stir the souls of people and also canines, particularly those who, sensing the seasonal transition, are eager to retrieve waterfowl, roust pheasants or point ruffed grouse.

Such dogs revel with their handlers in acute forms of symbiosis, from which stories unfold that sometimes are heartwarming and other times sidesplitting.

In the former category, a couple years back at Game Fair, Jeff Shie was overseeing an exercise in which a training dummy was thrown on land a moderate distance from a starting point, after which a handler was directed to send his or her dog for the retrieve.

A long line of blue-ribbon dreamers and their charges awaited their turns before, finally, a young boy who appeared to be physically challenged stepped forward with his dog.

"When the boy was ready, I signaled for the dummy, which was tossed, and the boy sent his dog,'' Jeff said.

"The dog raced toward the dummy. As he did, the boy bent forward, clenched his hands and said just loud enough for me to hear, 'Go Remy, Go! You can do it!'

"Quickly, the dog raced to the dummy, picked it up and ran back to the boy, who fell to his knees, hugging the dog. The dog licked the boys' face excitedly. Finally, the boy turned to me, handed me the dummy and said, 'My Remy loves me.'

To anyone who has ever held a scattergun in pursuit of a ring-necked pheasant, sharp-tailed grouse, prairie chicken or Hungarian partridge, South Dakota is the Helen of Troy of all states.

No one is born knowing how to surveil animals and shoot straight. Like other outdoor pursuits, learning works best with a mentor.

MINNEAPOLIS — In the 40 years since Chuck and Loral I Delaney founded Game Fair, the gathering of hunters, anglers, shooters, dog lovers and others impassioned by the outdoors has been considered a harbinger of fall. The...Read More

PORTERSVILLE, Penn. — Stars appeared and disappeared in the night sky, evidence of unseen scattered rain clouds blowing over Lake Arthur. The impoundment, about 40 miles north of Pittsburgh, was calm and quiet as we put ...Read More

Minnesota hunters are scrounging for rifle ammunition and shotgun shells as harvest seasons approach in the second year of an unrelenting ammo shortage.

The scarcity of rounds is changing sporting behaviors, impinging on ...Read More