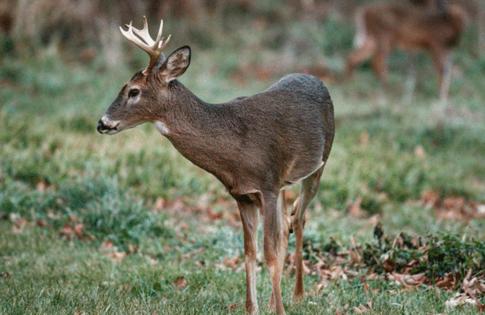 The public remains largely unaware of, or unconcerned about, a serious problem that some media dismissively call “zombie deer disease.” But conservationists understand that if chronic wasting disease significantly diminishes populations of a major keystone species that impacts everything around it, the environment may never be the same. Although humans can’t catch CWD, its ripple effects eventually could be felt by everyone.

CWD is spreading in 25 states and two Canadian provinces. It was first confirmed in Pennsylvania in 2012. A disease management zone was extended into Westmoreland County to slow the disease’s spread into Southwestern Pennsylvania.

In May, the peer review journal Scientific Reports published a study from the University of Alberta that describes a way to block CWD transmission in the lab.

CWD is not caused by a bacteria or virus. When transferred through body fluids, an unusually folded protein causes the spread of prions, or altered proteins, which cause the degeneration of brain tissue. According to the study, a variant of the prion prevents malformed proteins from passing the trait to adjacent proteins.

“This discovery is important because it suggests that there is at least one genetic variation in the prion protein that would block CWD transmission in white-tailed deer,” said Debbie McKenzie, a professor of biological sciences at the University of Alberta. “There are currently no methods available, other than removal of deer from the landscape, to stop or slow the spread of CWD. The [newly discovered] protein is a potential tool for decreasing the spread of the disease.”

The report suggested that a practical application of the discovery could be applied to the multimillion dollar deer farm industry. If the preventive protein could be bred into fenced deer populations, those deer could be less susceptible to CWD.

MINNEAPOLIS — Within a few weeks, northern Minnesota black bears preparing for hibernation will scrounge for 12,000 calories a day worth of food, a search that might lead the ravenous bruins to trash cans and bird ...Read More

MINNEAPOLIS — Wolves were first hunted some 10,000 years ago, and the fact that people are still weighing the merits of this practice demonstrates if nothing else humans' fascination with argument. The first known wolf ...Read More

This Fourth of July weekend, some Allegheny River boaters learned that independence does not mean absolute freedom on the water.

Saturday, while patrolling off the Point, law enforcement officers with the Pennsylvania ...Read More

MINNEAPOLIS — When we last heard from Daniel Balserak and Luke Konson, they were sleeping in a Toyota van in the Cabela's parking lot in Woodbury. This was November 2020, snow was falling and the intrepid pair started ...Read More