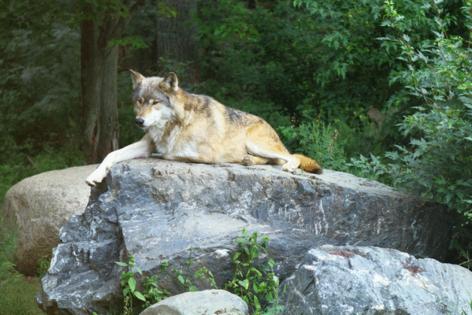 MINNEAPOLIS — Wolves were first hunted some 10,000 years ago, and the fact that people are still weighing the merits of this practice demonstrates if nothing else humans' fascination with argument. The first known wolf bounty was offered in the sixth century B.C., and between then and the early 1900s, when the U.S. government accelerated its effort to eradicate the troublesome canines with strychnine, the animals have grown in lore and legend to be both sinner and saint, depending on viewpoint, flip a coin.

So it is no surprise that the Minnesota Department of Natural Resources, its finger ever to the wind, will meet for another six months with 20 diverse opinion holders to develop a new management plan for the state's 2,800-odd wolves, including hunting or no hunting. Tacked onto the year and a half since the group was first formed, that'll be two years of yakking, and counting.

Minnesota wolves, meanwhile, keep on keeping on. Their range has expanded, their packs have grown to record numbers, and their population remains stabilized at multiples of the recovery goal established by the federal government when the animals were first protected by the Endangered Species Act of 1973. At the time, 750 wolves roamed Minnesota, up from about 400 in the 1950s, all mostly in the far northeast.

Those who are unfamiliar with wolves or who lie awake at night worrying about their presence on the state's landscape should know that, hunting or no hunting, barring the renewed use of poisons, which isn't ever going to happen, these four-legged wonders will be here as long as we will, maybe longer. A third of the state's wolves could be killed in a year — a quota that never will be approved — and its population, year to year, would hardly suffer a dent. If you doubt that, bone up on wolf science and particularly wolf reproduction.

Of course, science is the first thing tossed out the window nowadays, except when its reference is politically expedient. Gov. Tim Walz, for instance,wants everyone to be vaccinated against COVID-19, citing science for justification, and justifiably so. Yet the science of wildlife management and the role hunting plays in it seems lost on Walz, given that he thinks shooting pheasants is fine, as if the birds themselves are OK with it, but he's against the hunting of wolves. Go figure.

Meanwhile, his lieutenant governor — Peggy Flanagan, a White Earth Ojibwe Wolf Clan member — ratchets up the not-good-for-me-therefore-not-good-for-thee ante further still, saying the Ojibwe "has rules. You can't eat or hunt your own clan."

All of which is fine and dandy as far as personal opinions go, but it's a weird way to run a railroad, as it were, meaning a state, because anyone who has ever picked up a rod, reel or sporting arm has an opinion about how critters should be managed, how their bounty should be divvied up, and, in the end, what's right and what's wrong.

Ticking off a few of my personal complaints: Why are lead sinkers still allowed for fishing in Minnesota? (Answer: The governor and the Legislature are too weak to confront industry.) Why are lead shot shells still legal for hunting on state wildlife management areas? (Ditto.) And just who decided it's OK for corn and soybean producers to wash toxic cocktails of farmland chemicals and eroded topsoil into state rivers and lakes? (Ditto².)

Were I king, I would resolve these natural resource conflicts in my favor. But I'm not king. Neither, for that matter, is Walz or Flanagan, both of whom should exercise honorably their public-servant duties and lift the yoke of wasted time from the shoulders of the DNR wolf advisory committee by stating publicly they will abide by the committee's, and ultimately the DNR's, decision on wolf management, including whether to hunt wolves or not.

"We know on the committee no matter how much time we spend on wolves or what the revised wolf management plan ultimately says, Walz is going to do what he wants about wolf hunting," one committee member told me.

This Fourth of July weekend, some Allegheny River boaters learned that independence does not mean absolute freedom on the water.

Saturday, while patrolling off the Point, law enforcement officers with the Pennsylvania ...Read More

MINNEAPOLIS — When we last heard from Daniel Balserak and Luke Konson, they were sleeping in a Toyota van in the Cabela's parking lot in Woodbury. This was November 2020, snow was falling and the intrepid pair started ...Read More

I became a conservationist in the shadow of my grandfather in the mid-1960s. I was about 4, holding his hand in his Swisshelm Park backyard, peering through the chain link fence off a bluff overlooking the dull orange ...Read More

Summer's bounty in the Minnesota outdoors feels, well, almost normal as public health improves. In that spirit and on the eve of Independence Day weekend, the freedom to embrace the breadth of outdoors possibilities is ...Read More

MINNEAPOLIS — Minnesota state parks will be in business without interruption the rest of the year, thanks to a deal struck between Republicans and DFLers.

But domestic deer farms also will still be in business, ...Read More