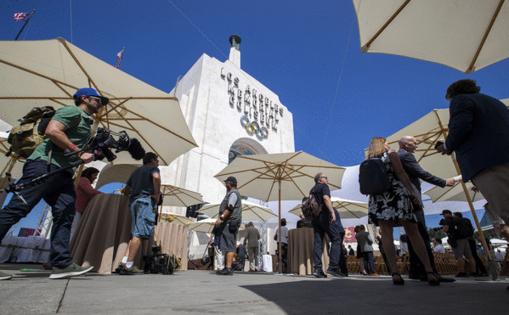 LOS ANGELES — The 2028 Summer Olympics in Los Angeles are still seven years away, but a proposed contract between city officials and the private LA28 organizing committee signals the beginning of critical negotiations over how the Games will be conducted. Here are a few of the most pressing issues for L.A. residents and the answers we have so far.

Will the Olympics affect taxes?

LA28 has vowed to pay for its estimated $7 billion event with a combination of hefty contributions from the International Olympic Committee and revenue from sources such as domestic sponsorships, merchandising and ticket sales. Organizers have already signed lucrative deals with corporations such as Delta Air Lines, Nike and Deloitte. But if things go wrong, city and state legislators have agreed to serve as a backstop, which means tax dollars will be used to cover any cost overruns.

Will traffic get ugly during the Games?

City officials and organizers have yet to devise a transportation plan. For now, they point to the 1984 Los Angeles Olympics, when many residents left town, employers switched to flexible work hours and truck deliveries were shifted to nighttime. Local freeways have never been so uncongested.

Will Los Angeles be inundated with tourists?

Some host cities experience a bump in tourism, but research shows the net increase is often smaller than expected or doesn't materialize at all. Blame the "crowding out effect," a theory by which non-fans and business travelers who might otherwise visit a region are scared away by the prospect of Olympic-sized crowds. The Games can benefit cities such as Barcelona and Salt Lake City by putting them on the map as global tourist destinations; L.A. doesn't need that sort of help.

Where will events take place?

With so many existing venues to choose from — Staples Center (soon to be called Crypto.com Arena), the Coliseum, Pauley Pavilion, etc. — the Summer Games will be organized in clusters that dot the map from Long Beach northward to the San Fernando Valley. Many of the most popular competitions will take place downtown, on the Westside and at Dignity Health Sports Park in Carson.

Can I get tickets?

Again, organizers have yet to release details. Their proposed contract with Los Angeles would promise to make tickets "available for purchase by city residents" and offer "affordable" tickets to "moderate- and low-income individuals; individuals living near venues and live sites; students, military veterans and youth," among others.

What will happen to the homeless population?

The NOlympics LA coalition worries that police will conduct sweeps to get unhoused people off the streets before the opening ceremony. The draft contract between city officials and organizers includes a section vowing to "compassionately and responsibly protect the rights of local unhoused communities." LA28 chairman Casey Wasserman said: "We are a city whose economy very much depends on tourism, and that's a competitive industry that requires us to create a safe environment for visitors. That's a complicated situation."