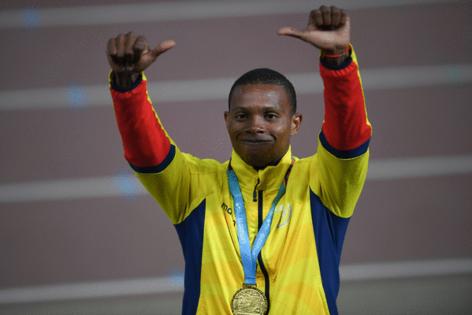 “The surprising departure of the bronze medalist of the last World Athletics World Cup [in Doha, Qatar in 2019] leaves a deep pain, but his legacy as the greatest sprinter in our history will forever remain in our hearts,” the committee tweeted Saturday morning.

According to the Ecuadorian newspaper El Universo, Quiñónez was shot Friday night under circumstances that “have not yet been clarified.”

One other man was also killed in the incident.

Quiñónez became a national hero in 2012 after reaching the 200-meter final at the London Games and finishing seventh in a race won by Usain Bolt.

“I have no words to express the sadness, helplessness and indignation that overwhelms me,” Andrea Sotomayor, the secretary-general of the Ecuadorian Olympic Committee, tweeted Friday night.

“Álex Quiñónez was the synonym of humility and the clearest example of resilience. His loss leaves us with a pain in the chest,” she wrote, adding “so much evil!”

Ecuador President Guillermo Lasso said that “those who take the lives of Ecuadorians will not go unpunished.”

“We are very sorry for the painful loss of Alex Quiñónez, father, son, a great sprinter who marked the sport,” Lasso wrote on Twitter.