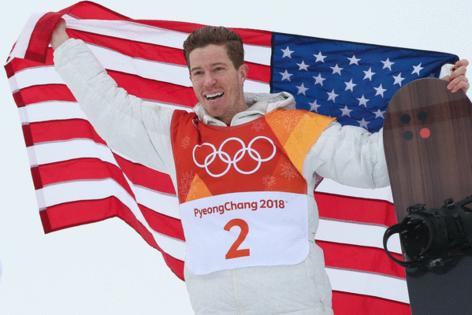 One thing that's not on the shelf yet: him.

White confirmed this month what was widely expected, that the 35-year-old from Carlsbad will try to qualify for a fifth U.S. Olympic team and win a fourth gold medal in snowboarding's halfpipe. Qualifying begins in December. The 2022 Winter Games open Feb. 4 in Beijing.

"I'm feeling a little seasoned at this age but hanging in there," White told a virtual media summit for U.S. Olympic athletes on Tuesday. "I will admit, you know, it is getting harder — just the day in, day out, the grind of doing these tricks. … Everything with patience and time."

White had the perfect walk-into-the-sunset moment at the 2018 Olympics in South Korea, winning his third gold by landing a pair of cab double cork 1440s (two head-over-heels inverted spins while performing two 360-degree rotations) … on the final run of the competition … for the first time in his career. Most expected him to retire from snowboarding but not from the Olympics, trying to make the U.S. team in his first love of skateboarding and become only the second person to win gold medals in Winter and Summer Games.

That dream ended in March 2020, either because (the cynical version) he never recaptured his childhood form and was too far behind in qualifying or (his version) he rekindled his passion for performing flips on snow.

"Obviously I had my sights set on the Summer Olympics," said White, who signed his first snowboarding endorsement deal at 7 and turned pro at 13. "But with the pandemic that struck and the really tough decision of, am I really ready to walk away from snowboarding yet, I just wasn't. I switched gears and switched focus back to the winter sports."

White has kept a relatively low profile over the last 18 months, which, considering the previous few years, is probably a good thing. His victory in Pyeongchang was tainted by his description of a lawsuit (ultimately settled) with a female drummer in his rock band that included graphic sexual harassment allegations as "gossip and stuff."

About the time he withdrew from Summer Olympic contention, White began dating Nina Dobrev, a Bulgarian-born, Canadian-raised actress best known for her role in "The Vampire Diaries." Their relationship reveal came in the form of a social media photo of Dobrev trimming White's famed red locks during quarantine.

They also painted the exterior of Dobrev's West Hollywood home, covering the mustard yellow in — what else? — white.

Deon Lendore, a sprinter who won a bronze medal at the 2012 Summer Olympics, died Monday.

The 29-year old, who raced for Trinidad and Tobago, was involved in a automobile collision in Texas.

A gold-medalist snowboarder has decided to quarantine for three weeks in Beijing instead of getting a COVID-19 vaccine ahead of the 2022 Winter Olympics.

Patrizia Kummer of Switzerland has not ...Read More

Newly crowned U.S. ice dance champions Madison Chock of Redondo Beach and Evan Bates were nominated to the U.S. Olympic team on Sunday, the final day of the U.S. championships in Nashville. The Beijing Games will be their ...Read More