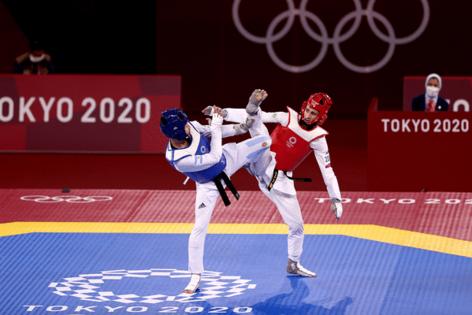 Woolley, who competed in taekwondo for Ireland at the 2020 Summer Games in Tokyo, posted a video to his Instagram story showing his upper lipped bandaged, with his location listed as “home.”

“Just gonna get some food into me and then rest up,” Woolley told the camera.

Woolley, 22, says he was injured Friday by a group of people who “began violently attacking people” in Dublin, the Irish Examiner reported.

“Unfortunately I was victim to these random attacks as I was just walking by, before I was punched in the face by one of these group members,” the athlete reportedly said.

Police in Ireland haven’t made any arrests, according to the Irish Examiner.

Woolley shared an Instagram post over the weekend that appears to show blood streaming down his face and covering his shirt.

In an earlier update to his Instagram story on Sunday, Woolley wrote that he’d undergone surgery.